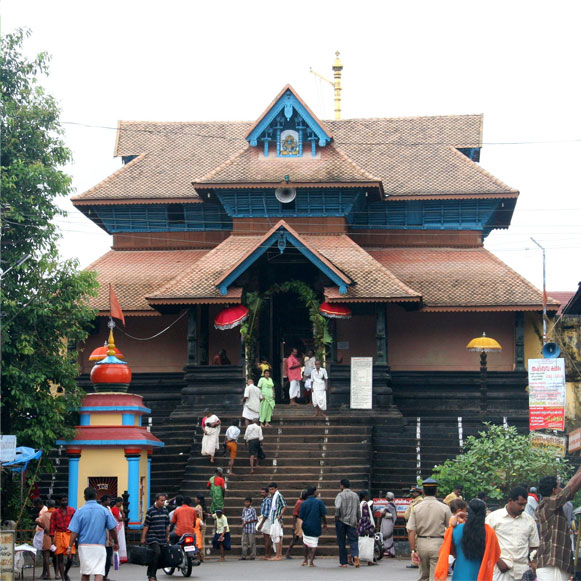 Aranmula Parthasarathy Temple is situated in Aranmula in Pathanamthitta district. This temple lies on the bank of river Pamba. The deity in this temple is Lord Krishna in the form of Parthasarathi and the idol has chakra in its hand. The architecture of this temple is in the traditional Kerala style. The building is round in shape. Aranmula is famous for the snake boat race and the Aranmula mirror.

There are many stories associated with this temple. According to the legend, Arjuna constructed this temple and the idol was bought to this place in a raft that is made of 6 bamboo pieces. Hence it is called as Aranmula which means ‘Six bamboos’. It is believed that Arjuna had built this temple to expiate the sin of killing Karna in the battle.

The boat race called as Aranmula Vallomkali is conducted during the Onam festival and it denotes the beginning of the Aranmula festival. Snake boats from around 39 karas participate in this competition. The boats arrive early in the morning and sail for around 2 hours. The race is followed by a feast in the temple. Another festival that is celebrated here is the ‘Khandavana dahanam’. It is conducted in the Malayalam month Dhanu which falls during the months December and January. This festival is celebrated to commemorate the Khandavana forest fire in the Mahabaratha. Similar to that incident, for this festival a model of the forest is made in front of the temple which is then lit.

The main festival lasts for 10 days and it begins with the Kodiyettam and finishes with the Arattu in the Pamba River. Some of the rituals carried out during the festivals include ‘Garudavahana ezhunallathu’ which is a colorful procession done on the 5th day of the festival, art forms like Kathakali, Pallivetta accompanied by 5 elephants etc.