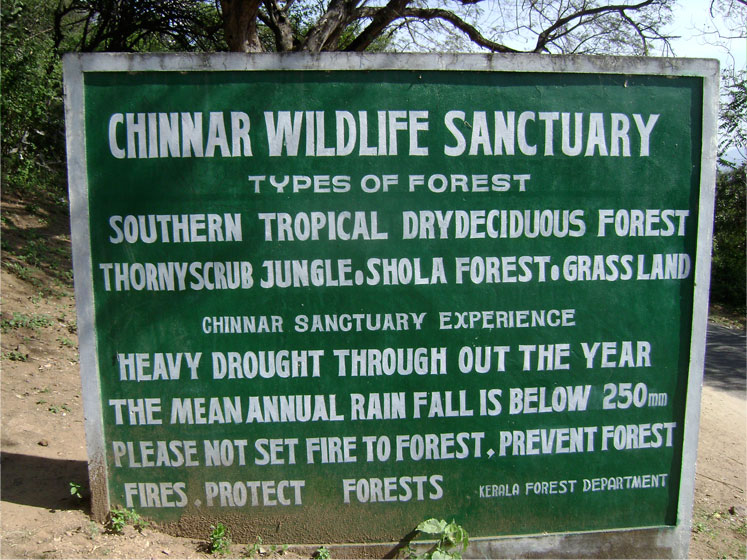 Chinnar Wildlife Sanctuary is located in Devikulam in Idukki district. The area around this sanctuary is a protected area and it was declared as a sanctuary in the year 1984. The main vegetation found here are dry thorny forests; it is because this area receives rain only 48 days in a year. Besides there are other vegetative types such as deciduous forests, shoals, grasslands etc. Due to the variation in altitude the area will be plain or covered with rocks and cliffs.

Chinnar is the main place of habitat for Giant Grizzled Squirrel which is an endangered species. There are large numbers of reptiles found here. A reptile called as Albizia lathamii which is an endangered species is seen in the dry forests of Chinnar. There is a wide variety of medicinal plants. The main attraction is the Sandalwood forest.  Some other animal species have also been reported as found in these areas such as the White Bison. The rivers namely Chinnar and Pamba flow through this sanctuary. Chinnar River originates from the Kumarikal Malai and then it flows through the state boundary and forms the Amaravati river in Tamil Nadu. River Pamba originates from Anamudi hills and many other small streams join this river. A waterfall is also found here namely the Thoovanam waterfall. The rivers Chinnar, Pamba, Kabani and Bhavani flow towards east.

In Chinnar there are about 11 tribes settled and each tribe is separated from one another by a wall. The main inhabitants among them include Muthuvas and Pulayas. The Forest Department and the Eco Department Committees have taken several measures for promoting and organizing eco tourism. Visitors who come to Chinnar get engaged in trekking activities.