Kerala obtain good rain and has a tropical climate which is very suitable for growing flowering plants. Due to the climate in Kerala, there are many types of flowers found abundantly and naturally. Some flowers are common whereas there are some which are rare. There are flowers grown in home gardens and some are found only in the forest areas. Different flowers are supported during different climates. The flowers are used for preparing various ayurvedic medicines as they have many medicinal properties. Flowers are also used while performing various prayers in temples and churches. There are some flowers that are poisonous and have pungent smell. 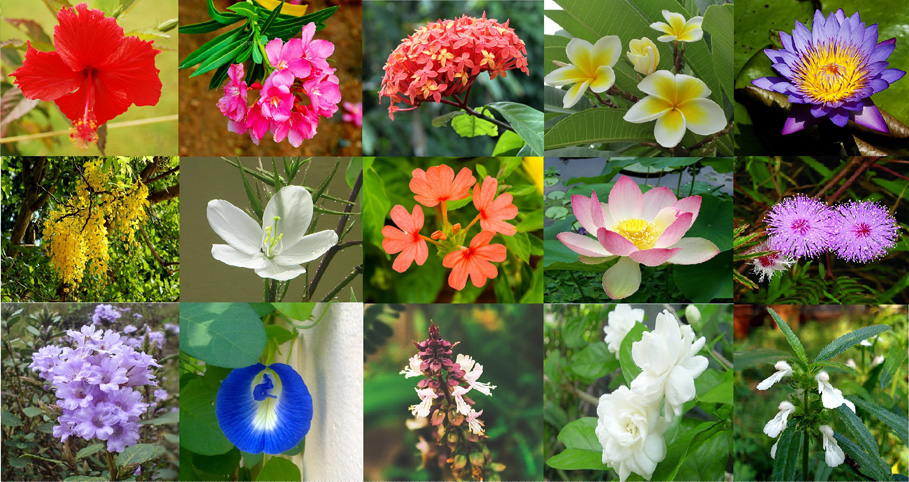 Some of the flowers found in Kerala are

It is also called as water lily or star-lotus. It is an aquatic plant having bright coloured flowers. The stem is submerged in ground and flat round leaves are seen above the water level. The flowers have many petals and floats over the water surface.

It is also called by many names such as Nerium plant, Dog-bane, South-sea rose, Adalpha etc. It is a shrub grown in garden and has beautiful flowers. They are also seen as herbs, shrubs, trees and climbers. A unique feature of the members of this family is the production of profuse sap. Even though this sap is poisonous, they are of much medicinal value.

It is also known as Krishna kireedam or Pagoda plant and is a shrub grown in the wild. Their terminal inflorescence last for about 6 months and the orange-red- bell shaped flowers get opened row by row. It is called as ‘Krishna kireedam’ which means the crown of lord Krishna because the inflorescence is shaped in such a way.

It is also known as Galasoka, Anganapriya or Ashoka tree. It is considered to be a holy tree and its leaves and flowers are used for preparing various ayurvedic medicines. It flowers during all the seasons and is found usually in the courtyard of houses. They provide shade during hot seasons for the people and so it is called by the name ‘Angana priya’ which means darling of the front yard.

It is also called as Joy-perfume tree. They are seen as both shrubs and trees. The flowers are shaped like a cup and are fleshy too. The petals and the sepals are not distinguished. The flowers have a very good fragrance and so are used as a room freshener and also for making perfumes. Women here like to wear this flower in their hair due to their high fragrance.

It is also called as Shavam-nari or Madagascar periwinkle. It is an herb with small and simple leaves. The flowers are white or pink in colour and blooms in every season. This flower contains alkaloids of medicinal values and hence is cultivated on a large scale.

It is also called as Mexican creeper, Rosa De Montana, Queen’s wreath or Coral vine. It is a climber and is grown in the wild. The flowers are grown in beautiful inflorescences. The stem of this plant is flexible and is hence used for making baskets.

It is also called as Abuli or fire-cracker plant. It is a popular shrub and the flowers are bright coloured. This flower is worn by the women on their hair. The leaves are simple and the ripe fruits of this plant burst when put in water. Hence, it got the name fire cracker plant.

It is also known as the golden-shower tree. It is the official flower of Kerala. The flower is golden yellow in colour and is of great importance during the festival Vishu. During this festival, the kanikkonna is worn on Lord Krishna’s idol and is shown to all as their first sight on the Vishu. They bloom during the Months April-May. When the flowers bloom, it is a treat to the eye and the leaves are not seen due to the presence of the golden flower. The petals when fell on the ground is so beautiful to see which gave the plant the name golden shower.

It is also called as bendhi or Pot-marigold plant. It is a annual herb having dark leaves and weak stems. The flowers have a pleasant aroma and are very beautiful. The flowers are used for extracting aromatic compounds and dyes. Women wear these flowers on their hair for any auspicious occasions.

It is also called as Madhumalti , Rangoon or Chinese creeper. This creeper grows wild and spreads very quickly.  The flowers have five petals and have plenty of honey in it. They are white in colour when new and the colour changes to red as the days pass by. The leaves can be used as anti-worm potion. There are also used for medicinal purposes and also for making baskets.

Also known by the name Dwarf white bauhinia, it is a garden plant. They attain only about 2 metres in height. The flowers are white in colour and blooms during all the season. The flowers have five petals with leaves in the shape of a camel foot. Due to this shape it is also called as the camel foot plant.

It is also called as the life-plant. It is a shrub and the flowers are yellow in colour and bear five petals. The plant collapses when touched or disturbed and after sometime it regains its shape. They are rich in various medicinal properties and are used in ayurveda.

It is the Jasmine plant and is a popular flower. It has a very good fragrant. The flowers are white in colour with five petals. There are various species of this plant. The women wear it on their hair as an ornamental flower.

It is called as the Four ‘O clock plant and is an herb. They are found in all seasons and has beautiful bell like flowers. The seeds are black in colour. As this flower blooms at 4 ‘o clock, it got the name four ‘o clock plant or nalumani which means 4 ‘o clock in malayalam.

Since this plant is seen only in the Western Ghats of Malabar, it does not have a specific English name. A peculiarity of this plant is that they bloom once in 12 to 16 years. The flowers are blue in colour and are a treat to the eye to see this flower’s blue inflorescence in the area where it is found. They flower during the months August to November. During this time, tourists from various places come to Munnar where this flower is seen in plenty.

It is also called as Crepe jasmine or Carnation of India. It is a small shrub with fragrant white flowers. The leaves are simple and the fruits are produced rarely. The propagation is carried out through stem cuttings. These flowers are used in temples for performing prayers.

It is also known as Black-board tree or Indian devil tree. The flowers of this plant are very small and aromatic and they open during night. The flowers when smelled causes giddiness. The tree has got a peculiar shape because each node has around seven to nine leaves arising from it and many branches come from a same joint. This tree is considered to be the home of fairies according to Indian myths and so is called as the devil tree.

It is called by various names such as Jathimalli, Common jasmine, Poet’s jasmine etc. It is a climber and has white flowers. The plant as a whole is rich in various medicinal properties. The leaves have seven leaflets. It is an ornamental flower and is worn by the ladies.

This spiny shrub is also called as Dasa-mandaram or Dwarf Poinciana. The flowers are yellow and reddish in colour. The leaves have large number of leaflets.

It is also called as Gokarna, aparojita, Butterfly pea or blue- pea vine. It is a climber and has a blue conch shaped flower. The leaves are rich in medicinal values. As the flower is conch shaped the plant got its name ‘Shankupushpam’ where ‘shanku’ means conch-shell in Malayalam.

It is the lotus plant which is an aquatic plant grown in fresh water lakes and ponds. The leaves are round shaped and floats in water. The flowers have red to white coloured petals. It is considered to be a sacred flower of the Hindus and it is believed that the goddess Saraswathi seats on this flower.

This evergreen shrub is also called as Thechi, West Indian jasmine or Jungle geranium. The flowers are brick-red to yellow in colour. This plant is considered to be sacred and is used for offering prayers in temples. It is a garden plant with simple leaves. They are also used for preparing ayurvedic medicines.

It is called as the Tickle me plant. They are also known by various names such as touch me not, shameful plant, prayer plant etc. It is because the plant wilts when touched. The flowers bloom during the end of summer and till the end of autumn. This plant has medicinal values and is used for curing heath issues such as piles, urinary stone etc.

Also called as basil plant, is an herb and has several medicinal values. The leaves are small and aromatic and are grown in front of the houses. They are considered to be a holy plant.

It is called as Leucas plant and is a wild small herb. The flowers are shiny and white in colour.  It has insect repulsive properties and is used in preparing ayurvedic medicines. This flower is considered to be a main part during the festival Onam, where flower carpets are made using various flowers.

It is also called as Gulmohur, Krishna-chura or Royal Poinciana. It is a weak-stemmed tree with beautiful flowers.