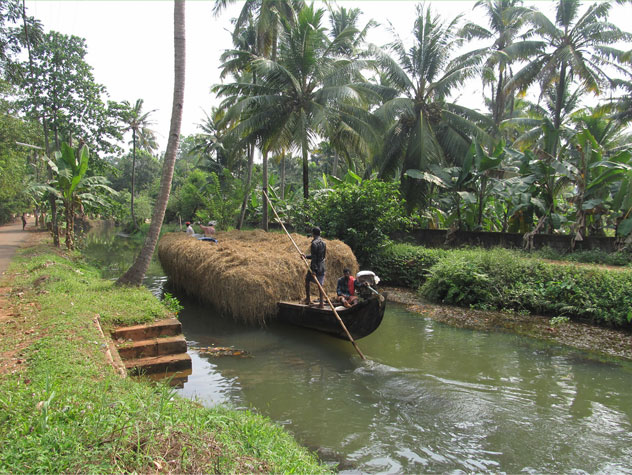 The houseboats of Kerala are modified forms of what is earlier called as Kettuvalloms. The word Kettuvallom is derived form the two words Kettu meaning tie and vallam which means country boat. The two words combine to form the Kettuvallam. It is the local carpenters who construct these houseboats by using various old techniques and principles. The wooden boards used for the construction are tied using coir ropes. The Kettuvalloms were used as cargo transporters through the backwaters of Kerala and the main item that was transported include rice as it is one of the major crops of Alappuzha.Kettuvalloms were used for normal transportation in the Travancore region and Kochi. It will take around 3 days to travel from Kuttanad to the Cochin port. It is interesting that a boat can carry a load that weighs about three times that of the weight a modern lorry can carry at present. As the backwater regions in Kerala are filled with water, it is difficult for other means of transportation.

A houseboat has an average length of 70 feet and the central section will be wider. They are made of wooden pieces and are tied together using coir ropes. The houseboats are made from a wood called Anjili and palm leaves are thatched to from the roof. The varnish coated on the houseboats is made of cashew nut oil. Long, carved wooden pieces are tied together using coir and coconut fiber is stuffed between them which is called as hull. Motor is used in the kettuvalloms and is steered in the water by using oars. In shallow waters, long bamboo poles are used for propelling in water.