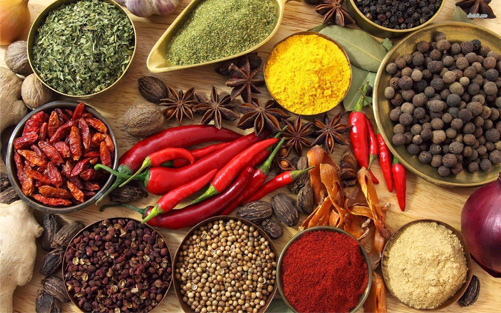 Kerala is known as the “Land of Spices”. And so the Kerala cuisine is famous for its spicy and hot foods. Traditionally, the food is served on a banana leaf. People add coconut to almost every dish they prepare, together they add spices for flavoring the cuisine.  All these give pungency to the dish and it increases with the addition of tamarind. The addition of coconut reduces the tongue-teasing hot flavor. There are also other items such as the crunchy pappadam, banana chips and jackfruit chips.

Kerala cuisine includes both vegetarian and non-vegetarian items. Keralites like vegetables, meats as well as seafood. The people of coastal areas are fond of seafood. While the people in the plains prefer vegetables and those from the tribal and north Kerala prefer meat.

The main ingredient in the daily diet is rice. For breakfast, lunch and dinner, it is some rice preparation or the other. The rice is consumed along with fish. Fish is either preserved by drying or is cooked with coconut.  Besides the fishes, seafood like prawns, shrimps and crustaceans are also consumed. 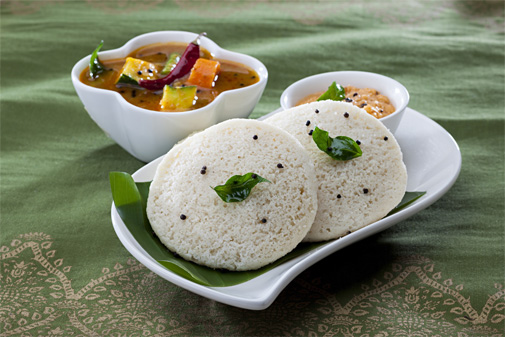 Keralites wake up early in the morning especially the women in the village areas.  They start their day at pre-dawn with a glass of tea or coffee. Then they start the preparations for the daily meal such as grinding rice, coconut, spices etc. The breakfast consists of dishes such as puttu, appam, idiappam etc. Puttu is cylindrical in shape and the main ingredients rice and coconut is steamed in hollow bamboos or ‘puttu kutti’ (the vessel for preparing puttu). Appam is a soft cupped rice pancakes which is very spongy at the centre and idiappam is a kind of vermicelli prepared by squeezing the rice dough through the idiappam presser and steaming it. These dishes also have side dishes along with them which includes sauces, egg roast etc.
There are tea shacks popularly called as ‘chayakkada’ where breakfast are served that includes strong, milky chai or local filter coffee. It is mostly men who come here to have these. They also use this opportunity to read the local paper and debate about the latest political scandals.

In towns and cities, the South Indian-style of breakfast is found. Here the menu includes vada which is a deep fried, disc shaped dish made from dal or gram flour, idli which is the steamed rice cake and many such items. Idli and vada are eaten with sambhar which is a chilli hot curry or chutney which is a paste made from coconut. It is most common to find the idli-vada-sambhar combination breakfast in railway stations and bus stands.

In resorts of Kovalam and Varkala, during the opening times, it is flooded with travellers. It is because the cafes here provide various dishes such as banana pancakes, toast, omelettes, lassis and fruit shakes. Espresso is also available together with freshly baked bread, fresh fruit salads with honey, grated coconut and curd.
When we stay in star hotels, they provide buffet breakfasts which have a variety of dishes consisting of both Western food and South Indian dishes.

The Midday meals or lunch comprises of boiled rice that are eaten along with moru (curd or bitter milk) or rasam and vegetable curries. A dish called pachadi is cooked with mango cuts mixed with spices. As said earlier sambhar is a chilli hot curry in which pulses and vegetables are used. ‘Thoran’ is a coconut-based dish mixed with chopped vegetables and curry leaves. Pappadam which is a crunchy flake made of rice flour, chutneys and pickles are also consumed without which a meal is considered to be incomplete.

Muslim communities prepare mainly dishes made from wheat. They prepare cuisines like parottas and pathiris which are made from flour and are fried. They are served together with vegetable and non vegetable dishes. They also cook chappathis and pooris.

Diverse Use of Ingredients

The kitchens of most of the houses are filled with aroma which results from the wide variety of spices used for preparing the dishes. The spices such as pepper, cardamom, cloves, turmeric, ginger, chillies, and mustard are used in almost all the curries. At the same time people from poor family have to fill their stomach with just ‘kanji’ which is rice with water and they also take fish and tapioca. In most of the dishes, the Keralites use coconut oil and hence coconut in any form is a mandatory in Kerala dishes.

In Kerala there is variety of fruits such as jackfruits, pineapples, mangoes, custard apples, bananas etc available. People prepare traditional home made snacks out of these. Different types of chips are prepared from banana and upperi is prepared from jackfruit. Another favourite snack is the achappam which is rice flour cookies. All these are served with coffee or tea in the evening. 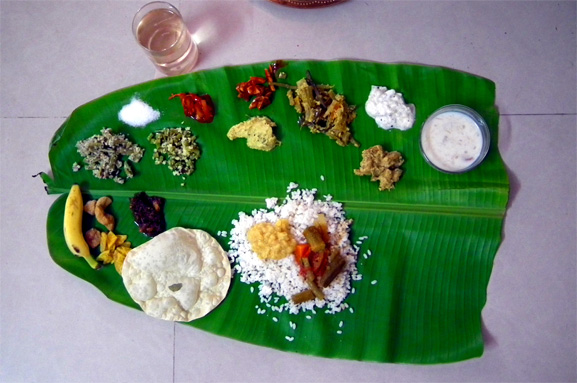 In Kerala the feast or the sadya is usually served on a banana leaf. The sadya consists of rice and more than 14 vegetable dishes, along with `payasam’ which is the sweet dessert cooked in milk.

Some of the delicious items are: