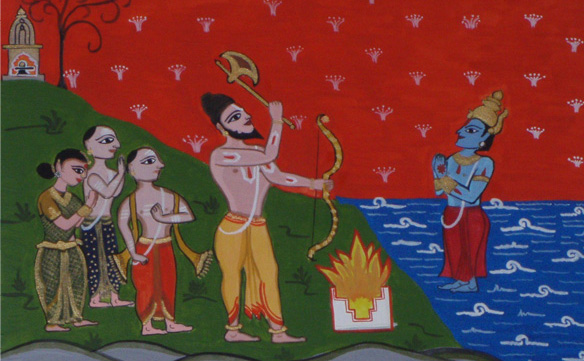 the warrior-sage who is one of the incarnations of Lord Vishnu. The myth says that after defeating the Kshatriyas, Parasurama approached the wise men for penance. To gain self-mortification he was asked to create a land for Brahmins. He agreed and decided to meditate at Gokarnam. He got the booms from Varuna, and Bhumidevi. Varuna is the God of the Oceans and Bhumidevi is the Goddess of earth. Parasurama then went to KanyaKumari (Cape Comorin) and threw his axe northwards across the ocean. The waters subsided in the path of the axe and a land was formed. This land is called the land of Parasurama which is today’s Kerala.

The geologists say that the elevation of Kerala from the sea was due to some sudden or gradual seismic activity. The scientific society also believes that as the rivers of Kerala flows into the Arabian seas large quantities of silt will be brought down from the hills. The ocean currents are responsible for transporting enormous quantities of sand towards the shore. The coastal areas get developed due to the accumulation of this silt over many years.

The Pulayas, Kuravas and Vetas were the first to live in Kerala. Later the Aryans from the north migrated to Kerala and controlled the others through caste system.

By the beginning of the Christian era, the Cheran Dynasty dominated the land and was spread up to Western Ghats. It was impossible for the armies of Mauryan Dynasty to enter the lands of the Cheras. When the rule of the Cheran Dynasty declined, there came the rise of the Brahmins in Kerala. By the 10th century, the Brahmins were the powerful entity from North Kerala to Kanyakumari. These Brahmins have enough wealth, land and power. Then these people developed the caste system in order to consolidate their power. Through these caste systems they segregated the people based on their castes. The lands owned by the Brahmins were leased out to the castes lower to them for share-cropping. These people in turn would further lease the lands to those lower castes according to the hierarchy and to non-Hindus. The lowest caste people were the laborers and were traded together with the land. The Namboothiris were considered as the rulers in this hierarchy.

The other peoples that came were the christians and the muslims. The Christians and the muslims who arrived were traders and they stayed away from the caste politics. They were not involved in the social segregation based on castes. But privileges were given to the Jews who arrived in Kerala. They came to Kerala in the beginning of the Christian era and gradually became a major part of Kerala’s population.

In Kerala there was a phase of feudal chiefs or warlords who were called as naduvazhis. By the 11th century AD there was a conflict in the caste system for gaining power between the landlords and warlords. This resulted in instability due to the lack of a strong leadership. Wars and conflicts became a common scenario.

The main three warlords that emerged were the Zamorin of Calicut, Moopins of Perimpadappu and chieftain of Kollam.

In Kerala the trade flourished around 3000 BC and hence it has a distinct place in the commercial world. Traces of teak are found in the Ur, which is generally found in the Malabar coast. Cotton grown in this region is famous in Egypt; the Phoenicians was interested to trade ivory, sandalwood and spices from the malabar area. King Solomon has sent his commercial fleet to Southern Kerala.

Ancient world’s largest trading center in the East was the Muziris (Kodungalloor or Cannonade). They traded items like pepper, cinnamon, cardamom, ginger and other spices. Pliny, the younger have mentioned that the trade with the East is a great loss to Rome.
India was known as the land of spices and gold. During that time, Europe was on voyages to various lands to discover them. One of the major dreams of many voyagers was the route to India. Various attempts were made by many but was not successful. They could manage to reach upto the Cape of Good Hope in Africa. The easiest way to India was found by Vasco da Gama, in 1498. He was a Portuguese naval Captain. He landed at Kappad in Calicut. It was a turning point to the East.

The Zamorin or Samuthiri of Kerala welcomed the arrival of Portuguese warmly. They gave various concessions in trade. The portuguese had rivalries from the Arabs and other kings. So the Portuguese was engaged in concentrating their trade positions at sea. Many local kings opposed this. One of the famous Samuthiri Admiral was Kunjali Marakkar who is still considered as a hero in Kerala. He tried to put a limit to the expansion of the trade by the Portuguese. But the Portuguese were well equipped and so he couldn’t stand long against their power. The Portuguese showed special interest towards the christians in Kerala. The christians in Kerala are those who were converted by St. Thomas the Apostle in the 1st Century AD. These people were Hindus in their culture and there were not aware of the Pope in Rome. In 1599, the Synod of Diamper decided that all Christians should consider Pope as the Supreme heads. The Syrian christians revolted against this. These revolters tied themselves to a cross and took the oath on 15 January 1653. This is called the “Koonan Cross Oath” and it was a turning point among the Syrian Christians.

The Portuguese succeeded in converting some of them into Latin Catholics which is at present one of the main section in Kerala.

The arrival of the Dutch made it difficult for the Portuguese to trade peacefully. The Dutch was locally called as Lanthakar and they want to get rid of the Portuguese from the spices trade. They had an alliance with the Samuthiri and it was easy for them to drive the Portuguese out of India by 1663.

The Kochi Maharaja was considered as the titular head and the Portuguese was sent out. The main aim of the Dutch was to get control over the total Eastern spice trade. For this they have set up the East India Company in 1602.

The Dutch got control over the coastal areas mainly of Kannur and Kochi. A treaty was established in 1717. The Dutch was finally defeated in the battle of Kolachel by the Marthanda varma who was the king of Thiruvithamkur. By 1795, the power of the Dutch declined and it was easier for the British to put them out of kerala permanently.

Some of the crops grown in Kerala were introduced by the Dutch and the Portuguese. Some of them are pineapple, papaya, rubber and modern farming techniques for coconuts. Even today the farmers in Kerala depend upon these crops for their survival in the agricultural economy.

During the rule of the Dutch many buildings have been constructed. Some of them which remind their rule in Kerala are the Dutch Palace at Mattancherry, the Bolgatty palace at Kochi which was the mansion of the Dutch Governor. It then became the British Resident’s mansion.

The famous ruler who reigned during the Dutch conquest was Marthanda Varma, King of Thiruvithamkur. He brought the warlords and the Dutch under his control. Later all the principalities of southern Kerala till Kodungallor was made under his control. Marthanda varma was a great warrior. He performed many new reforms in his kingdom. He converted the conquered lands into state lands, obtaining government income through foreign trade, improving the condition of farmers etc. He also reduced the powers of the government servants who were usually from higher castes and families. People from other castes were employed and so for the first time, importance was given based on competition rather that birthright.

At that time, there were revolts against the British in North Kerala. It was called the mappilla lahala or Muslim Revolt. That too was suppressed.

The fight for freedom started after the First World War. In 1922, There was protest against the fee hike in colleges. Many movements also supported for the revolt. This issue was supported by the Khilafat Movement. The people from Malabar stood as one irrespective of their religion whether they were Hindus or Muslims. The reformers were beaten and ill treated by the police. The British obtained full control by deploying police, called the Malabar Special Police.

The freedom movement of India has a bearing on Kerala. The idea of Salt Satyagraha originated from Kerala. In Vaikom there was a satyagraha for allowing lower caste people into temples. It gained much importance and was considered as a challenge to the rule of the British.

Sooner or later many other organisations were also formed to struggle for their rights. The Samyukata Rashtriya Congress was formed which consists of people belonging to Christianity -Islam and the Ezhavas. They formed an alliance for getting reservations in Government. It was also the first time a community grouped party system in Kerala was formed.

The Thiruvithamkur State Congress was formed by Pattom Thanu Pillai. A movement was started to fight against the rule of the Thiruvithamkur diwan in 1938. It resulted in violence all over the state.

The states of Thiruvithamkur and Kochi were grouped as “Thirukochi” after Independence. Later on 01 November 1856, the Kerala state was formed to unite all the people who spoke malayalam. It consists of the malabar area and Thirukochi.

After gaining independence, the movements in Kerala were mainly the Leftist movement and Indian National Congress. In the beginning the Communist Movement was as naxalite movement. Some of the famous Communist leaders were EMS Namboothiripad, AK Gopalan and P Krishna Pillai.

After 1959 many governments came which was led by the Congress or the Left parties.