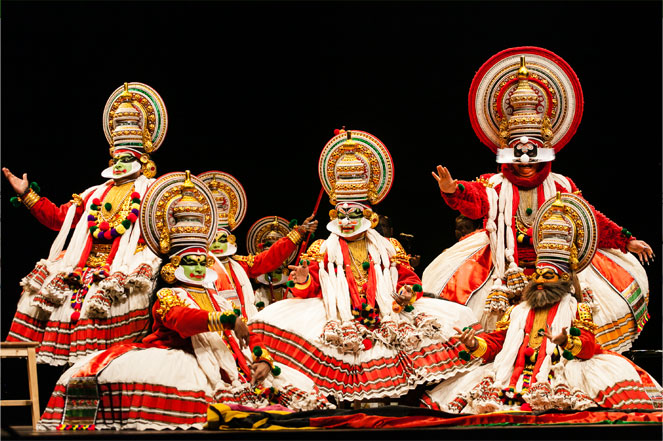 Kathakali is a dance drama which is believed to be an oldest dance form of Kerala. The dance form of Kathakali was evolved from Ramanattam in the 8th century. It was created by Kottarakkara Thampuran who was a promoter of ancient art forms. It is a combination of dance, music and drama. The characters performed enact stories from the epics like Mahabharata and Ramayana. It is usually performed in temples but it can also be seen in the theatre nowadays.

Kathakali is a combination of five arts namely Literature (Sahithyam), Music (Sangeetham), Painting or make up (Chutti), Acting (Natyam) and Dance (Nritham). The theme for playing Kathakali is obtained from the Indian mythology. It is a dance form which follows the fundamentals mentioned by Bharata in Natya Shastra. This play requires good command over body together with facial expressions. The performer also has to make hand gestures called as Hasta mudra. There are 25 mudras and 700 Upa mudras. These mudras are very graceful in the movements and look natural in gesture. The costumes used while playing Kathakali is very colorful together with weird makeup.

The Kathakali dance is around 400 years old but its actual roots are traced to around 1500 years earlier. In Kathakali it is possible for us to find the combination of Aryan and Dravidian cultures. It has borrowed various elements from other dance forms, dramas and other rituals.

Kathakali is composed of three main arts namely the Abhinaya which is acting, Nrithya meaning dance and Geetha which means music. In this the communication is by gestures and hand poses and the performer do not speak or sing. Even though Kathakali is a combination of drama and dance, the drama part dominates. All feelings are expressed on the face, so the absence of speech does not matter at all. It is a realization of the person or anything that is actually seen around us. It is the displaying of person through the medium of art.

An important element of Kathakali is the music. In the orchestra we can find two musicians, where one uses a Chengala and the other uses an instrument called Elathalam. The main singer is called as Ponani and the assistant is called as the Sinkidi. Besides, there are two players playing Chenda and Maddalam. Chenda is an instrument which can be used to play a loud sound and Maddalam is also somewhat similar instrument and has the appearance of a big Maddalam.

The type of singing in Kathakali is called the Sopana style which has a slow tempo. This song is sung mainly to provide the actor with a good opportunity for Abhinaya. Along with the musical instruments the musicians sing the words in the dialog from behind the screen and it is enacted by the Kathakali performer with the help of facial expressions and hand gestures. The actors play in harmony with the music.