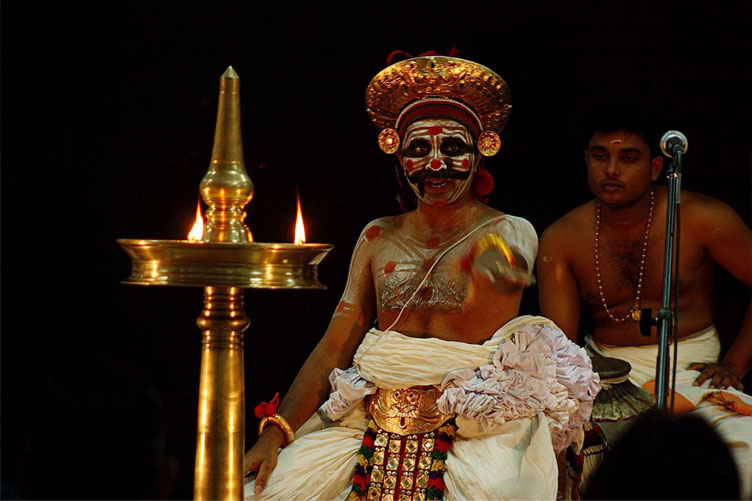 Chakyar Koothu is a performance art which is similar to a comic art or a mono act. This dance is performed by the people of Chakyar caste and is performed from the Koothambalam in temples. It is an ancient theatrical art and the expressions and gestures performed in Koothu are related to the principles mentioned in the treatise Bharata’s Natya Shastra. Through this performance the actor has a brilliant way to embarrass the audience. The themes for the play are taken from the stories of the epics which are originally in Sanskrit. The actor recites these by translating it into Malayalam by making body movements in the Thandava dance rhythm and also with gestures derived from the Natya Shastra.

The word meaning of Koothu is dance, but this naming is actually a misnomer as this does not involves much choreography. The most important thing needed in this play is the facial expressions and is dominated by the comic. It is performed from a temple beginning with a prayer. The actor then narrates some portion of the play in Sanskrit and then explains it in Malayalam also. In the narration, the actor includes topics such as current events, social factors, political events etc. with a touch of humor. The way of narration during Koothu is dramatic as the impersonation is done through mime and gestures, mixed with occasional dance steps.
The actor wears a special costume, has a type of headgear and a peculiar makeup. The instruments used include Mizhavu which is a huge drum and cymbals. The Mizhavu is beaten by any person from the Nambiyar caste at regular intervals and the cymbals are played by the women known as Nangiyars. If the Koothu is performed solo by a Chakyar, it is called as the Prabhandha Koothu and at times they are presented by the Nangiyar women. This is called as Nangiyar Koothu.

Initially this art was performed only from inside the temples. A great Koothu and Koodiyattam performer Madhava Chakyar brought this art to the outside common people by bringing it outside the temples. Madhava Chakyar’s guru Rama Varma Parikshith Thampuran wrote a new prabandha called Prahladacharita and asked some artists to perform it. But they denied it saying that staging such a new prabhanda was difficult. Then Madhava Chakyar who was a young artist at that time took up that task and performed a part of it the next day by studying it within a night. This made many scholars to accept his talents and he then performed the whole Prahladacharita in the stage.