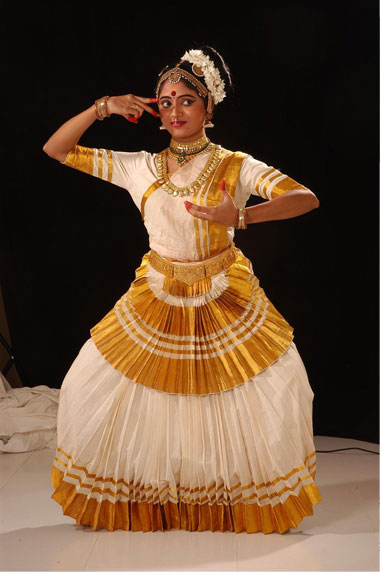 Kerala is rich in many dance forms which are highly developed. The music and costumes used in these dance forms reflect the mood of the people. They are also connected to religion and this can be seen in most of the folk dances such as those performed in connection with the harvest festival etc. The dance forms are performed by men and women together in one dance or as separate dances. The dance is accompanied by songs which are sung either by the dancers themselves or by group of musicians. In some cases, the song won’t be sung and instead there will be music alone played with several musical instruments. The dancers may carry a stick or some other object while dancing certain steps or they may also clap while performing some dance steps. The costumes depend upon the area from which the dance is being played or originated. Most of the dance forms are very simple but involves a lot of expressions.

There are around 50 popular folk dances in Kerala. Some of them include Thullal, Thiruvathirakali, Mohiniyattom, Koothu, Kathakali etc. Some of the dance forms are given a brief introduction

It is an old dance form that was developed in Kerala and is a combination of opera, ballet, masque and pantomime.

It is a dance form that has the elements of Bharathnatyam, Kuchipudi and Odissi dances. It is a semi classical dance form which tells the story of Mohini who was a Mythical character. The movements of Mohiniyattam are very graceful and the costumes are fascinating.It is a solo dance performed mainly in Kerala and the songs are in both Malayalam and Carnatic music.

It is an old dance form which was introduced by the early Aryans. It is an orthodox type of performance performed by the people of Chakyar caste. It is played inside the temple premises in special theatre called as Koothambalam. In this dance, the story is recited in a dramatic style in an elegant declaration with suitable expressions and gestures.

Thullal is a dance form which is unique with its simplicity in presentation and humor. It strictly follows the principles that have been mentioned in the Natya Shastra written by Bharatamuni. Thullal is performed as solo and is conducted during temple festivals from the temple premises. It involves music also and the themes for the play are obtained from myths. Even then social criticism is a main feature of this dance.

Koodiyattam is a masterpiece art of Kerala in which Sanskrit dramas are enacted very well. The theme for the Koodiyattam performance is written in Sanskrit and is based on religious and ritualistic topics. The Koodiyattam is performed from a special stage called as Koothambalam. As per tradition, the dance was performed by the people belonging to the Chakyar caste.

Krishnanattam is a modified form of Ashtapadiattom. This dance form is greatly influenced by the folk dances Theyyam, Mudiyattom etc. So the makeup, costumes, masks used, head dresses, all are influenced by these folk dances. The costume of Krishna was designed by a Krishna devotee named Vilwamangalam.