Kerala is a state located on the South West edge of India. It is a narrow strip of land and lies between the Western Ghats mountain range on the Eastern side and the Arabian Sea on the Western.

The Kerala state is lined by coconut trees and beautiful beaches. The leaves of the coconut tree provide shade to almost the entire State from the tropical sun. Tourists can have a wonderful time riding on small boats through the beautiful backwater lagoons or can watch elephants roaming in the wildlife sanctuaries.

Kerala has a rich tradition. History says that the Phoenicians, Romans, Arabs, and the Chinese have sailed to Kerala to trade for spices, wood and ivory. It was Vasco Da Gama who discovered India by landing to Kerala. The influence of Chinese articles such as Chinese fish in Kerala has started since their arrival to Kerala. The history of Kerala is a combination of old tradition with new values. 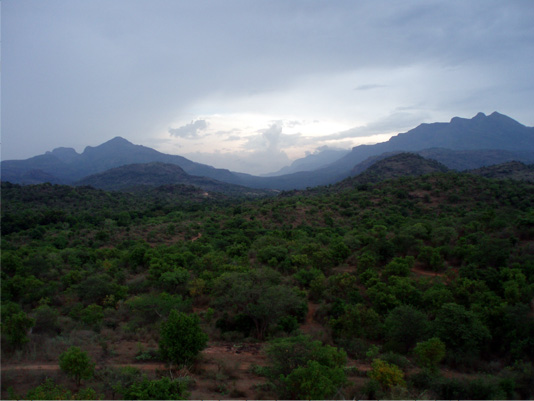 Around 48% of the total land is occupied by the Western Ghats which is also called as the Sahyadri. The highland rise up to an average height of 900m. There are numerous peaks in this Ghats which are over a height of 1800m. The total land covered is estimated to be around 18650 sq.km. This area is ideal for cultivating crops such as tea, coffee, rubber and spices. This area is popularly called as the Cardamom Hills. It is called so because these regions yield cardamom in large quantities. The highest peak in the Western Ghats is in Munnar. The peak is called as Anaimudi with a height of 2694 meters. Many rivers originate from the Western Ghats.

The Midlands are made up of hills and valleys and they lie between the mountains and the lands. These midlands cover around 40% of the land and are estimated to be an area of 16200 sq.km. It is in this area that cultivation is mainly done. Various varieties of crops are grown here. The remaining land which is about 4000 sq.km is covered by the lowlands which are also called as the Coastal Area. There are a large number of lagoons which are known by the names Kayels, backwaters and coastal areas of the Arabian sea. The soil is very fertile and paddy is mostly grown in this area. Kerala is known as the land of coconuts and rice. In Kuttanad region the cultivation is done below the sea level. It is one among the few places in India where cultivation is done below sea level. The main means of transportation in these areas is through water.

Rivers, Lakes and Backwaters of Kerala 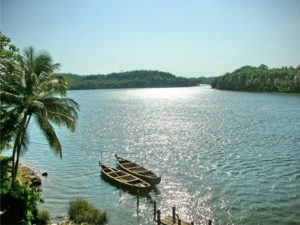 Kerala has abundant water sources. Even though Kerala is small in size, there are 44 rivers, out of which 41 flow towards the west and the remaining 3 flow towards the east. Besides these main rivers there are also many tributaries and distributaries, numerous streams and brooks. All these water sources make Kerala a fertile land and is the main reason for its greenery. It also serves as inland waterways. Moreover there are countless lakes and backwaters which give extra beauty to the land. The largest lake is the Vembanadu lake having an area of 260 sq.km and the largest fresh water lake is the Shastamkotta lake.

The total forest area in Kerala is estimated to be 11,125.59 sq.kms. There are also 12 Wild life Sanctuaries and 2 National Parks in these. The area under forest covers a total of 28.88 % of Kerala. The forest area is mainly in the Western Ghats. The forests in Kerala can be categorized into 5 main groups. They are Tropical Wet Evergreen Forests, Tropical Moist Deciduous Forests, Tropical Dry Deciduous Forests, Mountain Sub Tropical and Plantations.

The Western Ghats is one of the World’s 18 hot spots of bio-diversity. It is rich in wide variety of rare flora and fauna. The rivers, mountain rain forests, tropical forests, grasslands etc makes it suitable for a variety of plants and animals to inhabit these areas. The animal life includes elephant, tiger, sambar deers, cobras, horn bills and many others. A total of 25 % of nations 15000 plant species are found in Kerala.

Kerala lies near to the equator, but due to the presence of sea and the Western Ghats, Kerala enjoys an equable climate that changes little from season to season. The temperature usually varies from 27° to 32° C. The two main rainy seasons in Kerala are the Northeast Monsoon and the Southwest Monsoon. The annual average rainfall received in Kerala is 118 inches.

As Kerala is a coastal land it is bordered three sides by land and one side by the Arabian sea at the west.  The neighboring states of Kerala are Karnataka in the north and Tamil Nadu sharing the border with the rest of Kerala. So the whole of the western and southern frontiers of Kerala is bordered by Tamil Nadu.

The coastal regions of Kerala are rich in variety of minerals. The mineral ores present in Kerala are silica, quartz, bauxite and sillimanite. Moreover, the best and finest type of China Clay is available in this state.