Kerala Police have eight Armed Police battalions. They are 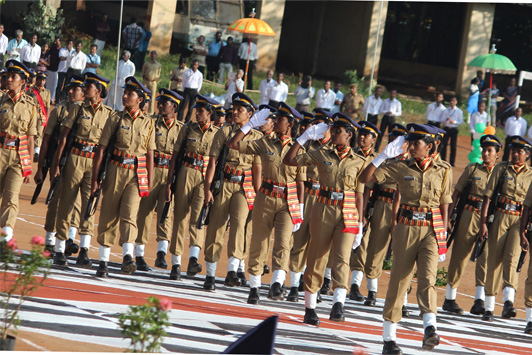 The Battalion of KAP was formed with Sri. G. K.Menon as its first Commandant. The KAP I Battalion is situated at Ramavarmapuram, Thrissur town. This Battalion lies between Kerala Police Academy and Armed Reserve camp. The Battalion has a Headquarters company and 6 active companies. 26.03 acres of land is available for the battalion headquarters. The battalion has no permanent detachment camp.
The main feature of this camp is the special shape of its barracks. These barracks are 3 storied and is in the shape of ‘Z’ and ‘L’. It was constructed in 1930s. Each building has a total area of 12000 sq ft. There are two entrances to this battalion with sentry post in each of them.

The headquarters of KAP II Battalion is located in Palakkad District. It was formed on 1977. The camp is perched on the root of Ghat Wind, which assumes high velocity and adversely affects the health of the personnel. Hence this place is subjected to extreme climate. Currently Nilambur is a detachment camp.

Initially KAP 3 Battalion was formed at Nilambur. Then the headquarters were shifted to Thiruvananthapuram, then to Alappuzha, Cherthala and Malappuram. Finally the headquarters was fixed at Adoor. The camps here have modern buildings. This is the first Battalion with such buildings constructed after the formation of Kerala.

KAP 4 Battalion was formed in 1980 with its headquarters at Aluva. Sri.M.S. BalaKrishnan, IPS was posted as the first Commandant. The KAP 4 camp was originally built for an active company of Malabar Special Police. Later the Battalion Headquarters was shifted to Mangattuparamba, Kannur in 1983. The total area of the camp is 87.78 Acres.

KAP 5 Battalion was formed in 1983 for providing guard to Hydro Electric Projects and other Vital Installations. This Battalion supports the needs of Kottayam and Idukki Districts. The detachment camp is at Munnar. The Department has 4.87 Acres of land available here. There are 2 separate barrack buildings that can accommodate 200 Police men at a time with mess, Latrine and bathroom facilities.

The Malabar Special Police (MSP) is the paramilitary unit of the Kerala State Police. Their responsibilities include training new recruits, to help the local police units for maintaining the law and order of the state during any emergency. In case of emergency, this unit also form a riot police platoons which are fully equipped with riot gear. This Police unit is famous for their extraordinary tough training, and the best quality of its firing and military drills.

The SAP Battalion was formed on 5th August 1958. This is the second Armed Police Battalion of the State. The second Battalion of the SAP was formed in 1963. The force was specially selected and sent to Nagaland to fight insurgency. Within 3 years they succeeded in suppressing the insurgencies and terrorist activities. The total land available for the SAP camp is 30.6 acres and 17.78 acres for the family quarters.