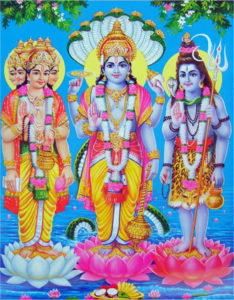 Hindus constitute the largest religious community in Kerala. In fact almost half of the population of Kerala comprises of Hindus. The Hindus worship many gods and goddesses. The three main deities which the Hindus worship are the Brahma, Vishnu and Siva. They are considered to be the creator, preserver and destroyer respectively.  Vedas, Epics and Puranas are the sacred texts of the Hindus along with other philosophical treatises. In these writings are explained how an Hindu should lead his life.

When the Aryans arrived in India, the caste system was evolved. It is these castes that determine the way of living and also their occupations. Most of the Hindu families have family deities and there will be a household shrine where they worship their deity.  There will be a priest to offer daily puja in temples.

It was in 1936, that the Travancore opened the Hindu temples to all Hindus irrespective of their caste and status. In 1948, Cochin also followed the same method. But even now most of the temples remain closed to non-Hindus. Sabarimala Ayyappa Temple is an important pilgrim center.

In every district except Malappuram the Hindus constitute the majority population.