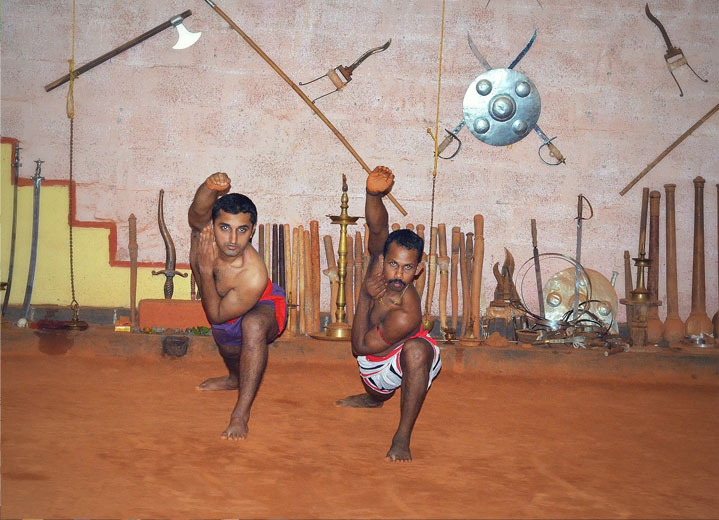 Kerala is famous for its various martial arts. Some of them include Kalaripayattu, Parisa Kali, Velakanni, Valeru, Kunderu and Njaninmel Kali.

Kalaripayattu is the best and most scientific martial arts in the world. The meaning of the term Kalaripayattu is the fighting art of the Kalari. This fighting is one part of the ayurvedic physical treatment in Kerala called the Kalarichikitsa. The origin and introduction of Kalaripayattu is still unknown and it was considered to be emerged from the old traditions of South Kerala. It was also influenced by the north Indian martial traditions. The present form of Kalari has existed since around 1500 years back. It is a combination of art forms from both North and South Kerala. It is believed that in 350 A.D. this martial art was carried away across the Himalayas by a Buddhist monk named Bodhi Dharma to give rise to another art named Chinese Kung Fu.

Kalari means battlefield and the in charge of Kalari was given to the Nayakanmar. They were later came to be called as the Nayars. In each region they are called by various names like Kurup, Nambiyar, Panicker etc. The Nayar will be in charge of a kalari or several kalaris and they are responsible for training the people in kalaripayattu. Such a person is called as Gurukkal which means master. In the olden times, Kalaris were established in Nayar homes. The Sanskrit word Khaloorika means a place where weapon training is done. It is believed that the word Kalari has originated from this Sanskrit word. And so the method of training in combats and weapon fights came to be called as Kalaripayattu.

Kalari was a place where subjects related to medicine, philosophy, astrology, geometry, yoga etc were taught. In Kalaripayattu, yoga is required for exercise and ayurveda is needed for medical treatments. The training starts with whole body oil massage until the body becomes supple. Steps such as ottam, chattam, marichil etc are then taught. Then the students are taught to handle various weapons and also to fight with hand. Some of the weapons include knives, bow and arrow, sword, stick, long and flexible spring like sword called urumi etc. It requires special skills such as concentration and attention. It is at the same time dangerous to learn using weapons. It is said that in order to become a Guru or master one has to pass seven levels. Those who learn Kalaripayattu can get rid of any physical problems. A guideline to be followed while studying kalaripayattu is that after the completion of the course, the person should take oil massage and practice the studied feats at least once in a year for keeping them in correct shape.

The two main forms of Kalaripayattu are the Vadakkan form which is the Northern style and the Thekkan form which is the Southern style. There is difference in these both forms in the style and the movements. The three maim types of Vadakkan kalari are Arappukkai, Pillattaanni and Vatteel tirippu. They gained widespread publicity. The thekkan style of kalari was more important and it is believed that Sage Agastya was the guru of this style. Even then the usage of various weapons and the style of performance made Vadakkan style more famous.

The two types of Kalari are the Cherukalari and Ankakalari. Cherukalari is called as Kuzhikalari in which the term kuzhi means pit or small areas formed by caving the earth. In Kuzhikalari, the floor of the kalari is lowered by removing the soil. The surrounding area is higher when compared to this kalari. This type of kalari is built for physical as well as weapon training. Ankakalari is the kalari that is constructed temporarily for fighting purposes. This is set up in areas where the audience can also come and watch the fight. A raised platform called Ankathattu is constructed for the person to perform kalaripayattu.

The main steps involved while training Kalaripayattu are

The main aim of this step is to attain flexibility and agility to the body. In this process the learner learns how to jump, twists and the various other body movements.

In this step, the learner learns to fight using sticks.

After attaining excellent skills in stick fighting, the person learns to use metal weapons such as knives, shields and swords.

This is the last step in Kalaripayattu learning where the student is taught how to fights without any weapons. They have to fight with bare hands. This involves wrestling, attack and defense.

Along with fighting techniques the trainer also teaches subjects relating to Ayurveda and also various healing techniques using herbs. It is necessary because the student must be able to heal himself in case of any ailments before preparing for a competition. So they are taught how to heal any wounds.

Kalaripayattu has its root in the vedic culture. This art form is considered as the most comprehensive because it involves Physical training, self defensive techniques with and without the use of weapons, treatment using the ayurvedic principles and a philosophy based on India’s vedic culture. All these features make it distinct from the rest of the martial art forms.

There are many training centres where Kalaripayattu is taught. Some of the important centres are at Ettumanoor, Kanjirappally, Pala, Thiruvananthapuram, etc. At present many are engaged in studying kalaripayattu mainly for demonstration purpose and also for fitness. In olden times, any disputes in Kerala during the rule of the kings were settled in battle or betting in martial arts competitions.  The warriors of Kerala were skilled in Kalaripayattu and any conflicts can be settled by the match of Kalaripayattu.