There are 22 diaries functioning in Kerala. These diaries are run by both the private and the co-operative sector. Out of the 22 diaries, 12 are in the Co-operative Sector called Milma and 10 are in the private sector or charitable societies. They have the capacity to handle 64000MT milk per annum. There are also about 25 small diaries, which are not registered and they handle 10000 litres of milk/day.

Kerala Dairy Farmers Welfare Fund Board has planned a social welfare scheme for its members. It is called ‘Ksheera Deepam’.

Kerala Co-operative Milk Marketing Federation (KCMMF) was established in April, 1980. It is known as Milma and it had its Head Office at Thiruvananthapuram and was established for the successful implementation of the Operation Flood. It was a diary programme started in 1970 under National Dairy Development Board (NDDB). 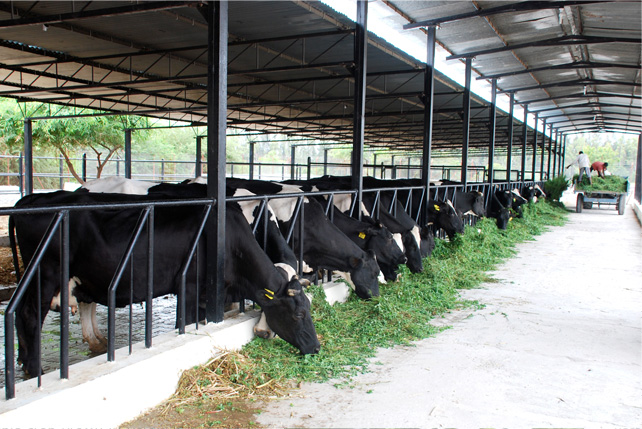 The livestock sector in Kerala is concentrated mainly in the rural areas. Kerala’s livestock sector makes a huge contribution to the economy. There are about 2965 Artificial Insemination Centres in Kerala. Kerala Livestock development Board (KLDB) is mainly concentrated in the production and distribution of frozen semen. The main aim while establishing was to evolve a new breed of cattle suitable for the state. KLDB has succeeded to bring new technology and methods in this sector. Their progress can be seen from the different establishments that have been set up in our state. It includes various bull stations, pig breeding centres, semen banks, goat and cattle, progeny testing units, and various other centres.

Poultry farming in Kerala is also done on a large scale. To give extra attention to this farming, Kerala State Poultry Development Corporation was established in 1989. There is a broiler-breeding farm and hatchery set up at Kudappanakunnu in Thiruvananthapuram.