Malayalam calendar also called as Kollavarsham is a solar calendar used in Kerala. The malayalam era was started in 825 AD. Before the use of kollavarsham the people used ‘Kali abda’.
The scholars had various opinions about the origin of Malayalam Era or Kollavarsham. Some say that 825 AD was the birth date of the philosopher Adi Shankara. While the others say that the great convention in Kollam was in that year. This convention was at the behest of Maharaja Udaya Marthanda Varma. Many scholars believed that it was conducted for the consecration of a Shiva temple. There are various other theories based on the origin of the era but all those were discredited by the main scholars as there is no evidence for these.

According to the Kollavarsham system, the new year starts from first of the malayalam month Chingam which is mid August. But the beginning of the solar year is given more importance. It comes in mid of April which is the malayalam month Medam. It is celebrated as Vishu. Vishu is similar to the festivals like Bihu in Assam and Baisakhi in Punjab. 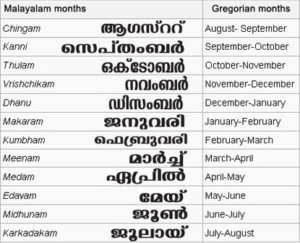 A temple festival celebrated is the Makaravilakku festival which is celebrated in the Sabarimala Ayyappa Temple on the first of Makaram. This marks an end to the two month period of the temple visitors.

There are some events in Kerala which are related to the malayalam dates. The agricultural processes in Kerala are based upon the seasons. The Southwest monsoon starts in the beginning of June and is known as Edavappathi which means mid-Edavam. The North east monsoon is called thulavarsham and it starts during the middle of October. There are two paddy harvests namely ‘Kannikkoythu’ and ‘Makarakkoythu’. Paddy harvests in the month of kanni are called ‘Kannikkoythu’ and that in the month of makaram is ‘Makarakkoythu’.