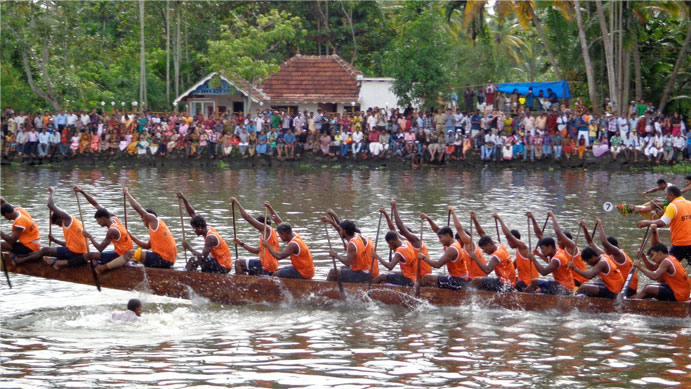 Nehru Trophy Boat Race is a popular boat race conducted on the Punnamada Lake near Alappuzha. This vallom kali is held annually on the 2nd Saturday of August. The main attraction of this boat race is the race of the Snake boats called as the Chundan vallams. This boat race is conducted in memory of Late Prime Minister of India Pandit Jawaharlal Nehru. When he visited Kerala, he travelled in a boat from Kuttanad to Alappuzha and he was accompanied by several boats. To honor him, the first race was conducted in 1952. The winner of that race was Nadubhagam Chundan and Panditji was so excited after seeing the race that he jumped into the chundan and travelled in it up to the boat jetty. Later he donated a Silver trophy with an inscription “To the winners of the boat race which is a unique feature of community life in Travancore Cochin,” above his signature. To commemorate this, vallom kali is held annually at Alappuzha and the trophy came to be called as Nehru Trophy.

The preparations for this vallam kali start a week before the event. The best oarsmen are selected and trained and there are about 150 oarsmen representing the village. This event is also a best example of the communal harmony existing in this area as people from all caste and religion participate in this boat race in unity. It is estimated that around 2 lakhs people including locals and tourists come to enjoy this boat race.