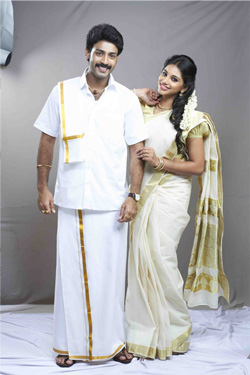 The Keralites prefer a simple living and it is reflected in the way they dress. Keralites have a natural attraction towards purity and this can be seen in their elegant traditional costume which is of white and off-white color. It is a favorite dress color among the men as well as women.

The traditional dress of the men in Kerala is the mundu which is a piece of fabric wrapped around the waist and it is long enough to flow down upto the feet. Similarly, Mundu neriyathu is a two piece dress worn by the women. It is the traditional costume of the Hindu women. The Christian women wear a chatta (blouse) and mundu. They wear mundu with a fan shaped fold at the back. Muslim women residing in central and north Kerala, wear purdah. Daily wears for the women in Kerala are either saris or churidars and shirts and trousers for men. The younger generation has now started wearing trendy western outfits.

Costume means the dress styles of the people of a particular region. People from different countries use different types of costumes. It is possible to differentiate a person by looking at the costume they wear. It is easy to find out to which community they belong to. South Indian people can be easily recognized from their style of dressing. It is quite different from the costume in the north India. The people in the east and west also have varied styles of dressing. The south Indian states generally have a common way of dressing.

f Kerala are generally simple and are usually moderately dressed. The people wear tight jeans and top wearing lots of make up with colored hair. Much importance is given to the way of dressing decently. Going back to the history of kerala, we find that the people mainly wear traditional dress. As said earlier the traditional dress of the women is the ‘mundu-neryathum’ which is a form of saree. It can be considered as ancient saree. They also wear the normal sari and blouse. The origin of the word “Sari” is from Sanskrit word “Sati” meaning a strip of cloth. During the earlier times the men wear shirt and mundu and also a small ‘neriyathu’ is placed on their shoulder. There are various ways in which a mundu can be worn. Hindu women wear mundu in a similar way as that of men. But the Christian women makes a fan shaped fold, at their back. They wear a long top over the mundu which extends upto the hips.

In the ‘mundum neriyathum’, the ‘mundu’ is worn around the waist as a lower garment. It is usually a cotton cloth wh ich is hand woven and so is comfortable during the summer. It is off white, white or cream color and has a colored strip as border which is called the “kara”. The ‘neriyathu’ is the next piece of cloth which is worn over the blouse. The one end of it is tucked inside the mundu while the other end is worn across the front. It looks similar to a sari when worn because the neriyathu is worn diagonally through the right hips to the left shoulder. The two pieces of the mundu and the neriyathu is starched well before wearing. People usually wear matching blouse with the color of th 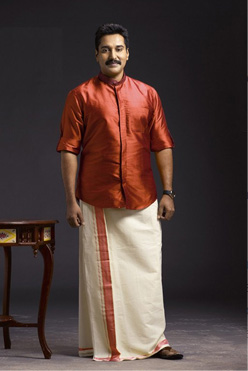 e blouse same as that of the border color in the sari. Earlier people wear it as a daily costume but now they wear it on special occasions and festivals. For festivals people usually wear mundu and neriyathu having border in gold, copper or artificial colored with various designs. During  Onam, women wear this and participate in a folk dance called as kaikottikali.

Now ‘mundum neriyathum’ has become an old fashion and so is worn by old people only. The new trend is the set-sari which is also known as kerala saree. With the emerging trend in fashion and designing, the modes of dressing have also changed. The traditional method of dressing is now getting vanished. The people are more interested in wearing northern style of costumes. Men like to wear t-shirts and trousers and women wear churidars. This type of dress is more comfortable especially during travelling. Now it is possible to see one in sari only during special occasions. People wearing the traditional dresses are considered by the new generation as old fashioned people. Today’s generation is still in search of new trendy ways of dressing. As time passes, it is necessary that one should change but even then they should not forget their traditions. It is good to uphold our traditions to wherever we go. It will then make you unique and should never consider it as a shame.