In Kerala, people get married among those of the same caste and religion. Intra caste marriage is the usual norm. But now some have also started choosing partners irrespective of the caste and religion. With education and advancement the new generation has also opted for global dating and marriage. However there are still younger generation who allow their parents to find a suitable spouse for their children. 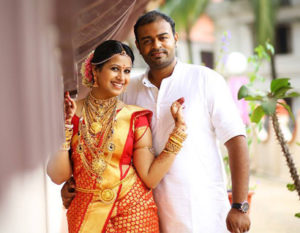 Keralites follow the traditional methods of matchmaking. It is one of the main responsibility of the parents to find a suitable alliance. Even their family members also help in this. So the initial step is to inform the social circle or the internal community about the parent’s intention of getting their child married. The boy/girls family members discuss about their marriage intentions and also the requirements for the prospective girl/boy. Finally a relative or any family member will approach the family with a suitable match for their child. They look into the details such as educational qualifications, interests, job, family background etc. Together with the individual compatibility of the girl and the boy they also check the family status as well as the financial capability. If the family is satisfied with these details they proceed further. In the case of Hindu families they check whether there is horoscope matching. It is one of the important factors during marriage decisions. Horoscopes are created based on the date, and time of birth and the birth star. In the horoscope matching, there are 10 matches. Some may have afflictions in their horoscopes such as the kuja dosha etc. In such cases it is very difficult and may take a longer time to find a suitable match. If the astrological compatibility is about 7-8 matching out of 10, then the parents get ready to meet the prospective girl or boy. They fix an auspicious day and the boys family comes to the girls house to meet them. The girl dressed beautifully is presented before them. It is not compulsory that the boy has to come along with his parents. If both the family agrees then a date is fixed for the engagement. The family may put an advertisement of their children’s marriage in dailies and magazines. There are new methods adopted for finding a perfect match. With the advancement in technology, there are various matrimonial sites developed for finding a perfect alliance. The marriage seekers will post an advertisement in such matrimonial sites specifying their requirements. There are websites based on the caste and religion as well.

Some matrimonial sites are:

In Hindu community, the people may marry their cousins. A boy can marry the daughter of his maternal uncle or his paternal aunt. Even among Muslims, this practice is followed. But Christians do not marry their relatives or cousins.

In Hindu community, an engagement function is held before the marriage. In this function there will be prayers from Vedas and poojas will be conducted in front of a sacred fire. The bride will be gifted articles like silk and jewels and the invited guests are given a sadya. Another important custom is exchanging trays between the girls and boys family. The tray contains articles like betel leaves, turmeric etc. It is considered as a mutual binding which is unbreakable. The marriage date is decided by checking the horoscopes and an auspicious day is fixed for the marriage. 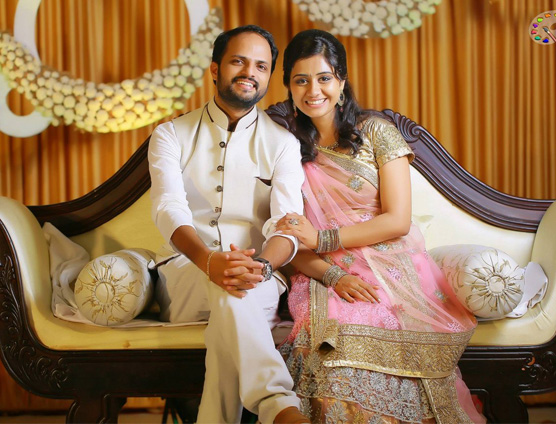 In the custom of the Syriac Christians, soon after the families shows their interest in the marriage, the bride and groom meet each other. When decided, they inform the concerned church and obtain a sanction. After getting the sanction, the bride and the groom have to undergo a premarital course which is conducted at the church itself. A formal engagement is then conducted from the church in the presence of the church officer and a vicar. It is called as ‘manasammatham’. A prayer is also conducted and the couples are blessed by the vicar. They exchange rings and it is recorded in the church register. During the church prayers conducted on the next 3 consecutive Sundays, the betrothal of the couple is announced. This is done in order to check whether anyone opposes the marriage. Then a date is fixed for the marriage.

In the Muslim community also after the consent of the families, the bride and groom meet each other. Then a ‘valayidal’ function is conducted in which the groom’s family presents the bride with gold ornaments. These gold ornaments may be either antique jewel which may have passed through several generations and has emotional value or new jewels. The marriage date is then fixed as per both the families wish. Relatives of the bride visit the groom and present him cash and gold. They also recite portions from Quran. In the case of both Christians and muslims, the engagement is not a binding.

Before the Marriage day:

Marriage Rituals:The marriages have to be registered and government supports for the legal registration of marriages.

In Christian community, the wedding preparations are known as ‘Madhuramvekal’. The groom gets his shaving and hair cut done. He is then applied with oil and is led to a customary bath. He then sits under the shelter of an umbrella held by his brother-in-law. The women clap and ululate and the groom gets dressed. The groom is given a sweet made of Banana and milk. In the same way the bride also gets oil-bath done. She is then beautifully dressed by her sister-in-law. The bride is also fed with sweet food to specify the sweetness arriving in her life. 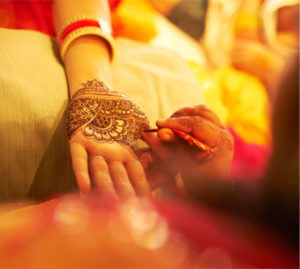 On the previous day of the marriage a function called ‘mylanchi ideel’ is conducted at the bride’s residence. Female relatives of the groom visit the bride and they apply mylanchi on the bride’s hands and legs. They sing songs and bless her. A traditional dance called ‘Oppana’ is also sometimes performed by the bride’s friends and relatives. Usually oppana is performed for the marriage when the bride is getting ready.

The day before the marriage, the bride and the groom conduct a small party for their friends and relatives at their respective homes. Nowadays in most of the houses, a few relatives of the groom arrive at the brides residence on the previous day of the marriage to give the wedding sari and the accessories. The groom visits any temple either on the eve of the wedding or on the morning of the wedding. The ‘thali’ gets blessed by the priest. The bride also visits a temple of her choice to seek God’s blessings. 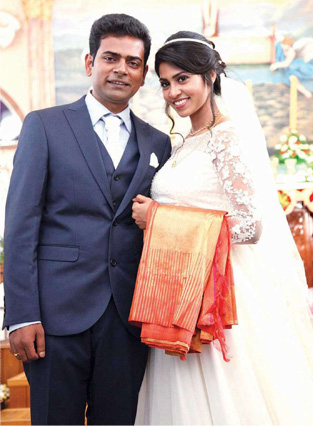 The Christian marriages are held from the church as is the case globally. It is the groom who invites the bride for the wedding and sends her transportation to reach the church and waits for her. The bride arrive the church wearing a white gown or an off-white saree. The bride also wears a veil. The groom comes in formal suit. The bride is given a bouquet of flowers by the groom’s best man. The priest welcomes the couple and a wedding mass is conducted, sentences from Bible are read and hymns are sung. The priest then presents a speech about the importance of family life, love, care and adjustments. This is called as Homily. After that the priest blesses the rings which are then exchanged. The couple promises to stay in love, be loyal and helpful to each other throughout their life. After getting the final blessing the couple signs in the marriage register at the church. The newlywed couples are showered with flower petals as they walk out of the church. Later a reception is held at the bride’s home.

Syriac Christians: The Syriac Christians of Kerala were formerly Hindus who were converted to Christianity. So along with the christian rituals some hindu rituals are also included. The groom presents the bride a sari called as the ‘manthrakodi’. They also tie a thali. This function is called the ‘thalikettu’. The remaining functions of the christians are also conducted later. 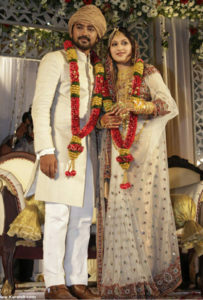 The functions in a Muslim marriage start with the arrival of the groom. He is accompanied by his family, friends and musicians. The bride’s sisters can play pranks on the groom. A gift called as ‘Mehr’ is decided by the family members. It is usually in the form of cash. It is the Maulavi who conducts the marriage. Lines form Quran is read and a contract is prepared. The contract is offered by the groom and is accepted by the bride. This is called as the Ijab-e-Qubul. The Mehr which is a compulsory gift is then given to the bride’s family. The agreement document also called as ‘Nikkahnama’ is signed by the bride, groom, their fathers and the Maulavi and it gets registered. The feast is given and the couples are allowed to see each other through a mirror. A prayer is also held after which the bride is given farewell by her relatives. 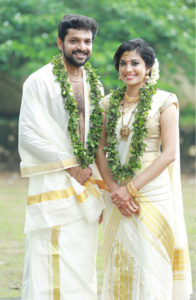 In Hindu marriages, the marriage is conducted either from the bride’s home or from an auditorium. Today most people prefer to conduct the marriage from auditoriums. On the wedding day, the bride’s family welcomes the groom who is accompanied by the ‘Nadaswaram’. It is a musical instrument and is played throughout the marriage ceremony. A special welcome is given by the bride’s brother to the groom by washing his feet with water. He is then escorted to the stage called as the ‘mandapam’. There will be young girls to accompany him till the mandapam. These girls will be holding oil lamp, a plate containing flowers etc. The ‘Mandapam’ is where the marriage takes place and it is decorated with flowers, small plantain trees etc. Now the bride also arrives escorted by the same girls. She wears a splendid silk saree. At the auspicious time called as the ‘Muhurtham’ the groom ties the thali. Then garlands and flower bouquets are exchanged. The family members and friends wish them and bless the couples. After having the feast called ‘Sadya’ the bride is taken to the groom’s home. A reception is usually held at the groom’s residence the same day evening or the next day.

Namboodiri Marriage Rituals: In the olden times in Kerala there exists a system where the Nambodiri men can marry Nair women which is called ‘Sambandham’. At those times the eldest son of a Namboodiri can marry an intra caste woman. This system is no longer present and now any Namboodiri boy can marry intra caste. Earlier the Namboodiri weddings were very elaborate and the wedding ceremony lasted for 4 days. But at present the function is completed in a single day. A sacred fire is lit and there will be a priest to chant vedic mantras. The thali is tied by the groom. The bride is given away by the bride’s father. He gives her hand to the groom and then washes his hands indicating that the girl no longer belongs to his family. The garlands are exchanged among the couples. Then the groom holds the bride’s toe and makes her walk 7 steps to the grinding stone. They also revolve around the sacred fire 7 times and make promises among them. The bride throws puffed rice into the fire. After getting the blessings from the elders they have the feast called ‘Sadya’.