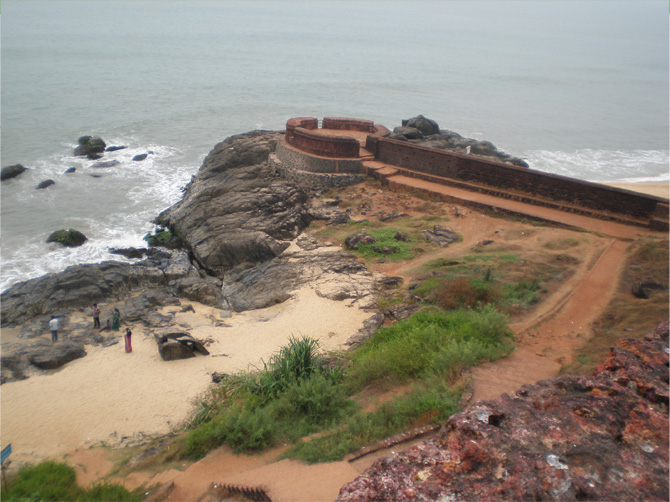 Bekal fort is situated in Kasaragod district and is the largest fort in Kerala. This is a very famous and well preserved monument of Kerala. The attractive feature of this fort is its giant keyhole shaped structure. It is surrounded by the Arabian Sea. It is so near to the sea that the waves striking on the rocks near to the fort make the exteriors of the fort drenched. It was constructed by Sivappa Naik in the year 1650 and is located in the highway. He was from the Ikkeri dynasty and the fort was then taken control by Hyder Ali and finally came into the hands of the British.

The structure of the fort is very impressive especially the underground tunnels, towers, corridors etc. There are several broad and wide steps that lead to the Observation Tower. This tower is around 30 feet high with a base circumference of 80 feet. The nearby towns like Kanhangad, Pallikere, Koottikulam, Uduma etc can be viewed from here. The view of the sea from this fort is marvelous. The total area of the land on which this fort stands is around 40 acres.

The entrance to the fort is built in a zigzag maze like manner and there are some hidden trenches, all of which are considered as a defense strategy to confuse and defeat the enemies. It is believed to have been built only for defense requirements as one cannot find any signs of palace or mansions inside the fort. On the outer walls, there are many holes through which the soldiers can aim at a far away point and attack the enemies.

As this is around 300 years old, it is a famous site of the archaeologists and is thus controlled by the Archaeological Survey of India. It is also an interesting excavation site and they have found many historical materials such as coins. There is a magazine inside the fort that was used for storing arms and ammunition. It is also controlled by the Archaeological Survey of India and the public is not allowed to view them. It is a favorite destination of the tourists and many visit this fort to spend their day.