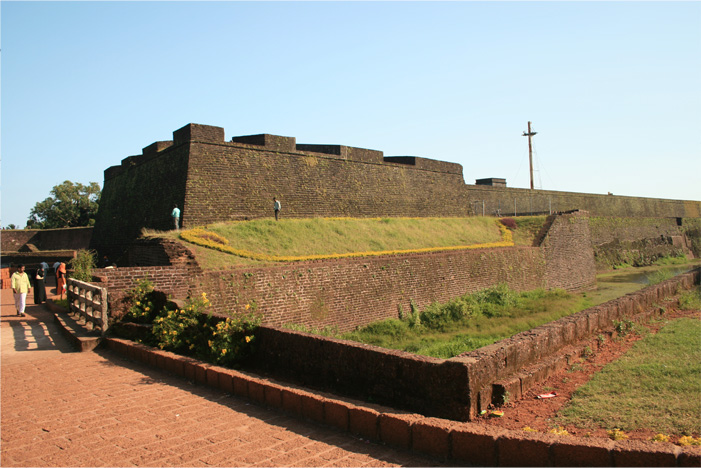 St. Angelo Fort is situated in Kannur district. It is also called as Kannur Fort or Kannur Kotta. This fort faces the Arabian Sea and lies in the Cantonment area in Kannur. It is separated from the sea by a huge wall. A stair case leads to the top of this wall. It is triangular in shape and made of laterite stone.

This fort was constructed by the Viceroy of Portuguese named Don Francisco De Almeida with the consent of the Kolathiris. This fort came into the hands of many powers that ruled here before. It was conquered by the Dutch in 1663 which was then later sold to the Ali Raja of Kannur in the year 1772. The Dutch had made some modifications for this fort. They constructed the bastions Hollandia, Zeelandia and Frieslandia which is at present the main feature of this fort. With the arrival of the British it came into their hands. This fort was used by the British as their station in Malabar. The fort was then modified and rebuilt by them.

Inside the fort there are rooms for punishing the prisoners. They are kept in dark rooms which had just a hole for supplying the food. Once the food is supplied that hole will be closed and the prisoner has to sit in the dark. There is a grave stone in the fort with an inscription on it. It is believed to be the grave of the Dutch commander’s family. Inside the fort there is also a chapel and a stable.

At present some parts of the fort has collapsed, even then it is not in a bad state. This fort has been protected by the Archaeological Survey of India. As this is an historical monument many tourists visit this fort. It is very beautiful to take a view of the Sea and the surroundings from the top of the fort. Some other attractions near this fort include the Moppila Bay Harbor and Arakkal Mosque.