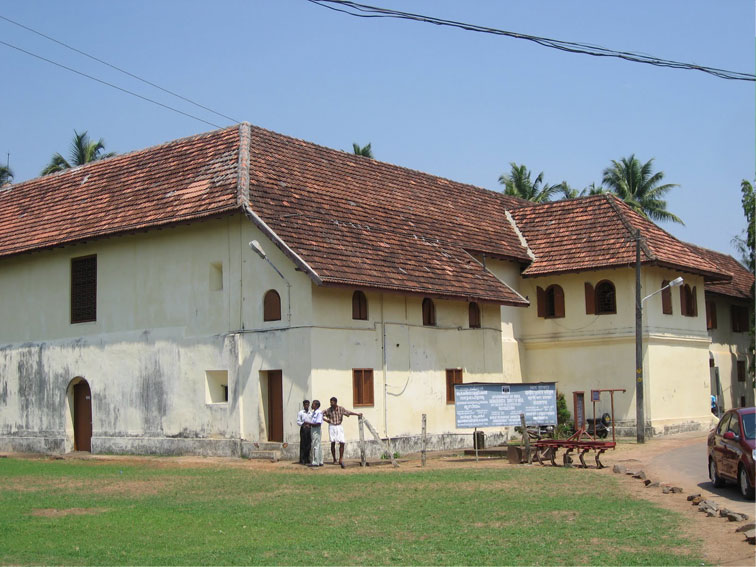 Mattancherry palace which is situated in Kochi is also called as Dutch palace. This palace was constructed by the Portuguese in the year 1555 and was presented to the Raja of Kochi, Kerala Varma. Later in the year 1663, the Dutch made some renovations to this palace and so came to be called as the Dutch Palace. This palace was used as the Royal home and also to conduct coronation ceremony. The main attraction of the palace is the mural paintings and also the decorations on the ceilings.

Mattancherry palace is quadrangle in shape and is constructed in Nalukeetu style which is a traditional type of architecture. The walls are painted white and the roof is brown in color. There is a courtyard in the middle of the palace. In this courtyard lies the Pazhayannur Bhagavathi temple who is worshipped as the goddess of the royal family. On both sides of the palace lie two more temples dedicated to Lord Shiva and Krishna. The architecture of this palace is an influence of European style which is very clear from the arches and the chambers. It is a mixture of colonial as well as Kerala architecture.

Two arches lead to the palace compound which is of Portuguese style. The ceiling is well decorated with brass cups. The flooring is done using a mixture of coconut shell, charcoal, lime, plant juices and egg whites. It resembles polished black marble and is a traditional type of Kerala flooring. The walls are decorated with mural art works. It is done in Hindu temple art and consists of both religious and stylized art forms. Several colors are used in this mural painting. The bedroom of the King which is called as the Palliyara is very beautiful and has ceiling made of wood. The wall is completely covered with around 48 paintings. The pictures depict scenes from Ramayana. All these paintings are very old and belongs to the 16th century. Paintings from Krishna Lila are also displayed here. The upper rooms and the halls that were modified by the Dutch also have some mural paintings of goddess Lakshmi, Parvathi, Lord Vishnu and Lord Shiva. In the coronation hall there are portraits of Cochin Kings which are works of local artists but done in Western style. The ceilings are made of carved wood that has beautiful floral designs. The ceiling of the dining hall is made of brass cups and the ceiling of the Assembly hall is also highly ornamental.

Mattancherry palace was restored and is considered as protected monument. The monument will be again restored with International standard and also preserves the important features as well.