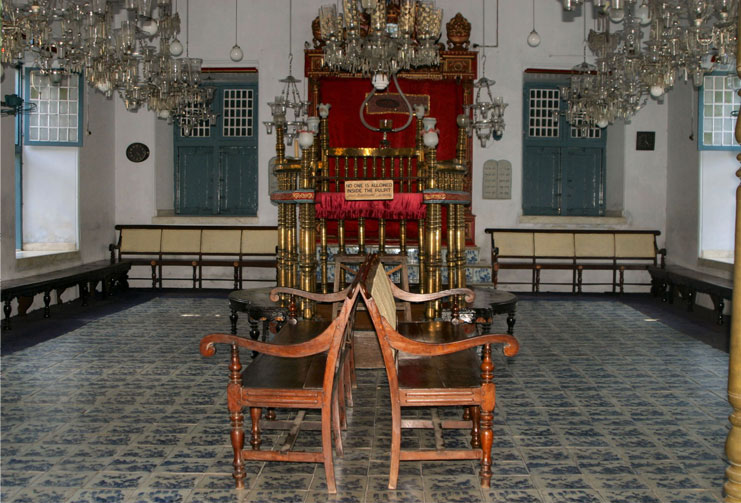 Mattancherry synagogue which is also known as the Paradesi Synagogue was constructed in the year 1568 by the Jewish community in Cochin. Hence, it is also referred to as the Cochin Jewish Synagogue. It was built on the land that was gifted to the Jews by the Cochin King. It is located in a place called Jew town. The word meaning of Paradesi is ‘foreigner’. This name is given to the Synagogue because this was initially used by the Jews from Cranganore, Middle East and Europe. It lies next to the Mattancherry palace. It comprises of 4 buildings.This synagogue functions with a minyan which is the only one of its kind in Kochi. As a result of the influence of Hindu culture the devotees can enter the synagogue only with barefoot. Some factors that are unique to this Jewish community are that they use separate colors of cloth for each festivals, distributing grapes soaked myrtle leaves during festivals etc. The Paradesi synagogue house several valuable articles such as the scrolls of Old Testament written in Hebrew, gold and silver crowns gifted by the Raja, glass chandeliers etc. The copper plates with Tamil inscriptions which were given to the earliest Jew, Joseph Rabban is found here. The flooring is done with Chinese hand painted tiles. Each tile is of different design and do not resemble one another. There is a clock tower that was added to the building in the 18th century. It keeps ticking even today and is the most visible part of this synagogue