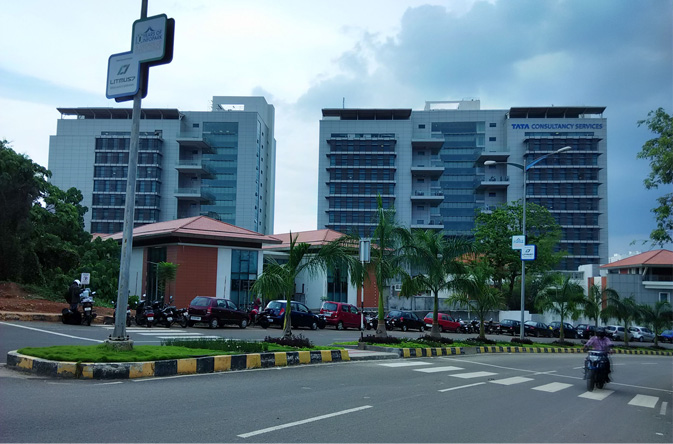 Infopark is an IT park which is located in kakkanad in Kochi and is administered by the Government of Kerala. Infopark has been set up on 100 acres of land and was provided by the government. Infopark is an independent society which is completely owned by the government. Their main ambition is to become one of the major IT parks of India. To aim this, they are growing at a very fast pace since its launch in 2004. During this short time period they received investments from many IT firms like Tata Consultancy Services, Wipro, OPI Global, IBS Software Services, US Technology etc. Due to their fast growth rate and their position, Infopark is very famous among almost all major IT and ITES companies.

Requests have been put forward by various IT firms and other developers for more space and land. So the Infopark has expanded their activities to Kunnathunad and Puthencruz villages in Ernakulam District. This is considered as their second phase in 160 acres. The infrastructure development is expected to be complete by September 2011. Besides, the IT park, plans have been made for building a business convention centre, hotels, shopping complexes, entertainment centres etc. This park will be designed in an eco- friendly manner.

This Infopark is located in Pallipuram in Cherthala. Out of the total land space of 66 acres, 60 are considered as Special Economic Zone. Plots have been marked for building IT companies and also for commercial applications.

This Infopark is located in Purakkad village in Ambalapuzha. As the land here is submerged in water, special plans have been made for its construction. The plan includes constructing special islands, bridges etc. So it will be the first water theme IT park of India after its completion. One island has been recognized as Special Economic Zone. There are other facilities such as convention centre, hotels, educational institutions etc.

There is another Infopark at Thrissur which is located at Koratty. It has a space of 30 acres of land and is planning to acquire more land in future. The development work for the infrastructure has already started.