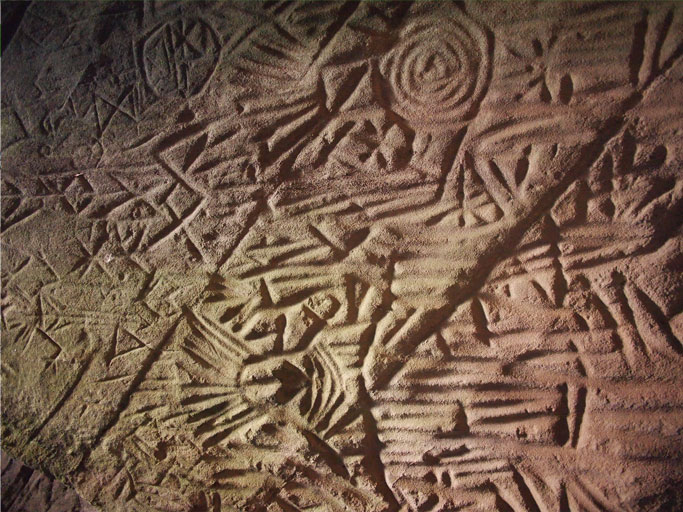 Edakkal caves are situated in Ambukuthi Mountains in Wayanad district. It lies at a height of 1200 m above sea level. According to the legend, this cave is formed by the arrows that were fired by Lava and Kusha who were the children of Lord Rama. People also believed that Lord Rama killed Shoorpanaka from this cave. This cave was discovered in the year 1890 by Fred Fawcett who was a Superintendent of Police in Malabar. The word meaning of ‘Edakkal’ is ‘stone in between’. The structure of this cave is in such a way that a huge boulder is supported by two small rocks. It acts as a roof and this beautiful structure is formed naturally.

The cave has 2 levels, the lower level with a length of 18 feet, 10 feet height and 12 feet width. The opening is small and is of the measurement 5 X 4 feet. There is a small passage to a way that leads to the upper level.  It has a length of 96 feet, 22 feet width and 18 feet high.

It is one of the World’s richest pictographic galleries. There are pictorial drawings on the walls inside the cave which dates back to around 5000 BC. This is a proof of the existence of the Neolithic settlements. These Stone Age carvings are very rare and consist of pictures of humans, animals, tools used for hunting etc. These carvings are in straight line which are very rare and are seen in European Alps and some places in Africa.

It is at present an important tourist destination. It is estimated that around 3 to 4 hours is required to climb the hill and then reach back down. The entry to the hill if up to 4 pm. It is advised to visit this caves during morning.
To take the panoramic view of Edakkal caves, follow the link:-http://p4panorama.com/panos/EdakkalCaves/index.html