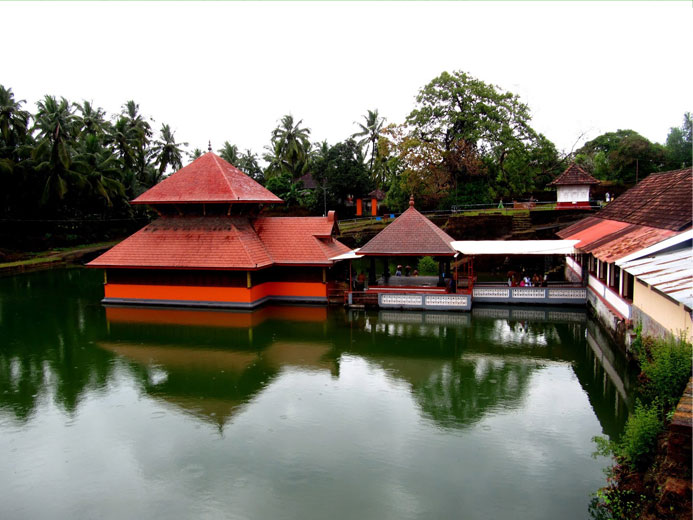 Ananthapura Lake Temple is located in Kasaragod district. This temple lies in the middle of a lake and is the only lake temple of Kerala. It is considered as the original centre of the Padmanabha Swami temple in Thiruvananthapuram. According to the legend, while Vilwamangalam Swami was praying, Lord Krishna in the form of a little boy disturbed him. The sage pushed the boy with his left hand and the boy disappeared through the cave nearby. He created a tunnel from one end of Kerala up to the Padmanabha Swami temple in Thiruvananthapuram.

Any person is allowed inside the temple irrespective of caste and religion. This temple was believed to be constructed in the 9th century.  The devotees can reach the temple through a foot bridge. A one day festival called as ‘Thapotsavam’ is conducted yearly in the month of April.

The deity here is that of Lord Vishnu seated on the serpent Adishesha. The idol is in the sitting posture while in Padmanabha Swami temple, it is in the Ananthashayanam posture. An important feature of this idol is that it is not made of stone or metal. Instead it is made of a combination of about 70 Ayurvedic medicines which is called by the name ‘Kadu Sharkara yogam’.

There is a crocodile in this lake that is considered to guard the temple. The most surprising thing is that it is a vegetarian crocodile named Babia. It does not even feed on the fishes in the lake. It is believed that this crocodile is present here for the past 60 years and lives in a cave nearby. At noon, Babia is fed by the devotees and the meal consists of a pudding made of rice and jaggery. According to the temple officials, Babia eats only the food offered from the temple.