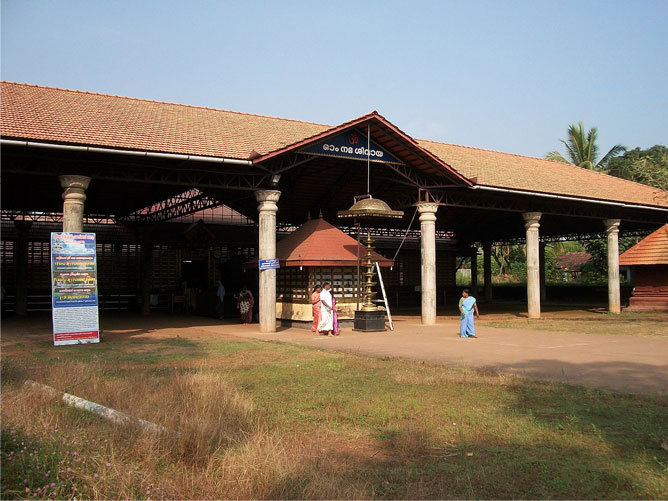 Taliparamba Raja Rajeswara temple is located in Kannur district. This temple was constructed in the 11 th century and is an example of Chola architecture. The deity here is Lord Shiva and is in the form of Jyothirlingam. It is said to be around 1000 years old and was believed to be installed by Maandhata who considered it as a sacred spot for installing the Shivalinga. The deity here is 3 times more powerful than any other Shiva temple. The idol is kept in a sanctum sanctorum which is quadrangle in shape. There is no flag staff in this temple which is usually uncommon. There is a Namaskara Mandapam in front of the sanctum and it is believed that Lord Rama has worshipped from here. The devotees are not allowed into this mandapam.

In this temple, men are allowed to enter at any time but there are restrictions for the entry of women. Women are allowed to enter the temple only in the evening after the Athazha Pooja. Local women who are pregnant consider that visiting three temples in Taliparamba namely the Raja Rajeswara temple, Sri Krishna Temple in Trichambharam and the Shiva temple at Kanjiraghat would bring all good for their children.

The art forms Koodiyattam and Chakyar Koothu are conducted from this temple. It is considered to be a sacred place for conducting this and so any new Koodiyattam is first performed in this temple. The main festival celebrated here is Maha Shivarathri. Some other important days celebrated in this temple are the Vishu, Karkadaka Samkramam and Nira. Some of the unique things about this Shiva temple is that here Thulasi leaves are used for performing any Poojas instead of Bilwa leaf which is used in other Shiva temples. While in other Shiva temples Rudhrabhishekam, Dhara and Pradosham is observed, here all these are not conducted. Annual festivals are also not held in this temple. Devotees can give Nai amrithu and Nai vilakku as offerings.