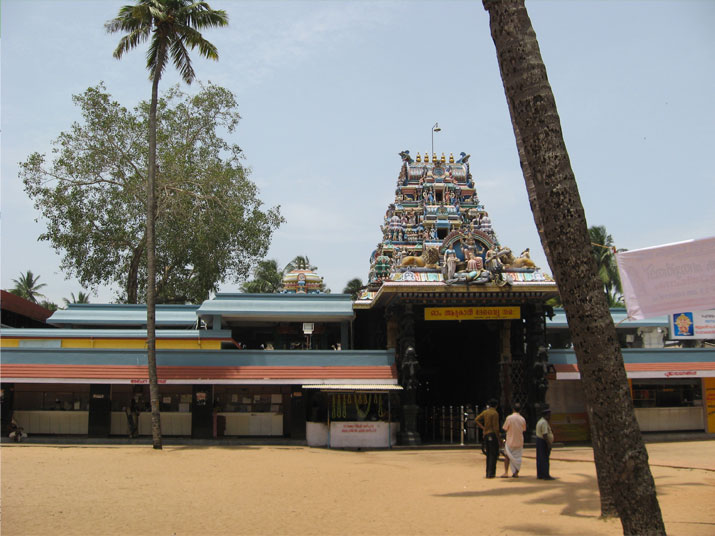 Attukal Bhagavathy Temple has got great importance among the ancient temples in South India. The deity here is Attukal Devi and the idol is beautifully decorated with gold ornaments. It is popularly called as the ‘Sabarimala of Women’. The temple architecture is a mixture of Kerala and Tamil Architectural styles. There are beautiful carvings on the temple depicting pictures of Dashavataram, Dakshayagam etc. The Gopuram of the temple is also beautifully carved.

The legend says that the Goddess had appeared in front of one of her devotee from the Mulluveettil family. She appeared in the form of a small girl and asked him to build an abode for her. Accordingly, the temple was built in the nearby compound at the spot mentioned.

The annual Pongala festival called as the Attukal Pongala conducted here attracts a very huge crowd of women. It is held during the months February / March. The festival lasts for 10 days. The Pongala festival for the ladies is conducted on the 9th day of the festival. Millions of devotees gather here to offer the Pongala. Attukal temple and the Pongala festival have found a place in the Guinness World Records for the record of largest women gathering festival in the world. It is estimated that over 3.5 million devotees have attended this festival in this year 2011. The total number of devotees coming here each year is increasing steadily. The crowd of devotees is so large that the ground from where the Pongala offering is made spreads from the temple compound to the main road, bus station, offices, courtyard of houses etc and extends up to an area of 6 km radius. Pongala is rice porridge and the women have to boil and prepare it to offer to the goddess.

On the Pongala day, a ritual performed by small boys is called as Kuthiyottam and the ritual performed by the girls is Thalappoli. Other activity during this festival is the Kappukettu which is the recital of hymns about the goddess. Once the recital is completed, the Pongala ritual starts. A fire is made in the temple fireplace which is then passed on to the devotees. The same fire is passed on to millions of devotees gathered to offer Pongala.