In Kerala, there are about 476 different species of birds. These include resident birds as well as migratory birds. The population of the birds is getting reduced due to several factors. Many species of birds are facing extinction. International Union for Conservation of Nature (IUCN) is an organization for the natural resource conservation. They have published a Red List which rates the status of the species regarding their extinction. 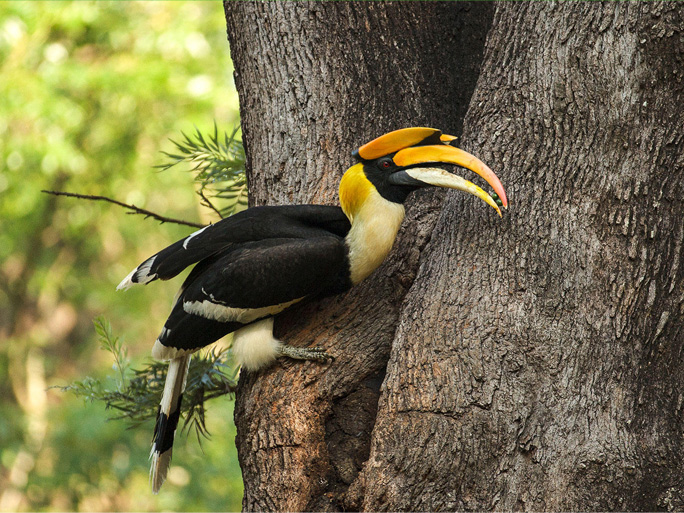 The Great Hornbill is the state bird of Kerala. It is the largest member of the hornbill family and is found in the evergreen forest. They are found on sea level up to 5000 ft height. The body is covered with black feathers and the neck is surrounded with fur. The bill is yellow in colour and is curved downward. There is a yellow and black coloured casque on top of its bill which makes it distinct. The females are smaller than males and have blue eyes. The legs are short with broad feet. The main threat is the destruction of their habitat. The bird is included as near threatened in the IUCN Red List category.

A rare evergreen forest bird seen in foothills and up to the highest sholas of Western Ghats. They inhabits in tall forests with fruiting trees. They are arboreal and frugivorous but occasionally descends to ground and feed on snails. This large pigeon with grey head and upper plumage brick red brown and green on upper back is seen in pairs or small parties. Sexes are alike. In International Union for Conservation of Nature (IUCN) Red List this bird is in vulnerable category.

A bird of evergreen rain forests and sholas seen in the foot hills to 3500 ft and higher. The birds are seen in pairs or families and are constant members of a mixed hunting parties of birds in forest. The call notes of this treepie are loud and more metallic than those of the common treepie.

It is a robin like slaty bird seen singly in undergrowth in sholas. They are restricted in evergreen forests above 3000 ft. The male has a lively and beautiful song during the breeding season. It is a shy and retiring bird whose food consists of insects. IUCN Red List included this bird in vulnerable category.

An indigo blue fly catcher like Nilgiri Flycatcher. But it can be identified by its white belly. Females are pale brown above with chestnut tail. They are seen in undergrowths of evergreen forests and sholas.

It is a shola bird about the size of sparrow. They are well distinct due to the black and orange colour combination. They are inhabited in dense evergreen sholas with ample undergrowth. IUCN Red List has included this bird in near threatened category.

Malabar Parakeet is seen in small flocks in the evergreen forests. It is a slender greenish or bluish-green parakeet with a long pointed tail, pinky grey head and blue wings. It is occasionally seen in low country in mixed deciduous or evergreen forests, often side by side with the blossom headed Parakeet. 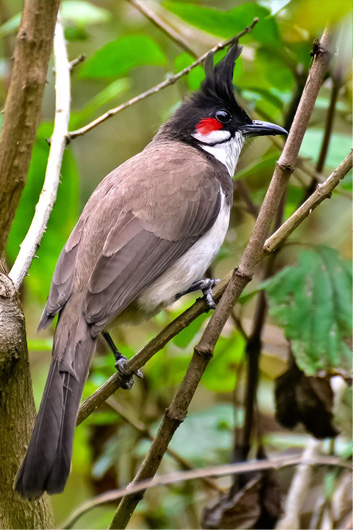 The bird is of the size of Redvented bulbul. With grey head, olive green and oil yellow body it is confined to the evergreen forests. They are also seen in secondary vegetation and lantana thickets on hill sides. Seen in pairs or small parties feeding largely on various kinds of Ficus figs and lantana berries in company with other frugivorous birds.

It is smaller than Myna with olive brown and rufous brown bird with deep grey forehead. Flocks of 6 to 8 or sisterhood are seen in scrub undergrowth and bamboo forests. Their habitat is semi evergreen or moist deciduous forests with tall coarse grass and bamboo brakes. Their food consists of insects and berries. The nectar of certain flowers is also regularly eaten.

It is a rare hill bird between the size of sparrow and bulbul. The colour of this bird is rich brown above tinged with rufous chin, throat and centre of breast and abdomen white sides of neck and rest of under parts ochraceous. Seen singly or in twos and tall grass covered hill sides, often steep and precipitous. The food eaten is insects. Particularly fond of matted grass and reed patches in marshy depress among hill tops. The bird is included as vulnerable in the IUCN Red List category.

Similar to rufous breasted laughing thrush but throat and breast grey in this species. They are seen in evergreen forests, thickets, scrub, secondary forests, edges of sholas etc. IUCN Red List has included this bird in near threatened category.

It is a olive brown and rufous coloured bird of the size of Myna. Slaty crown and nape with prominent white supercilium. They inhabits in dense undergrowth in sholas and evergreen forests seen in flocks. Food consists of insects and berries especially wild raspberry and hill guava. In the IUCN Red List the bird is included in endangered category.

It is a rare and beautiful bird about the size of Myna. They are chestnut brown above, ashy grey and chestnut below, pure white throat and black eye mask. The top of head sides of neck and upper back deep are slaty greyTheir tail is black and the sexes are alike. Their habitat varies from foot hills to high land sholas. The alert calls of the bird resembles laughing of humans and that is why the species are named laughing thrush.

It is a beautiful bluish green flycatcher. The females are duller and greyer. It is seen singly in the sholas and inhibits in evergreen forests between 3000 and 5000 ft. The IUCN Red List has included this bird in near threatened category.

It is a bird of grassy hill tops, about the size of sparrow. Olive fulvous above with broad black streaks, rich fulvous below with the breast and flank narrowly streaked with black. Their sexes are alike and inhibits in open grassy, rocky hill tops interspersed with sholas. Through this bird comes under the family of Wagtails its colour has the similarities as that of larks. It is now included in the IUCN Red List category as nearly threatened species.

It is a little sunbird with deep crimson brown or maroon above with no shoulder patch. This is the smallest of sun birds, seen in sholas, gardens, flowering trees and bushes in hilly evergreen forests.