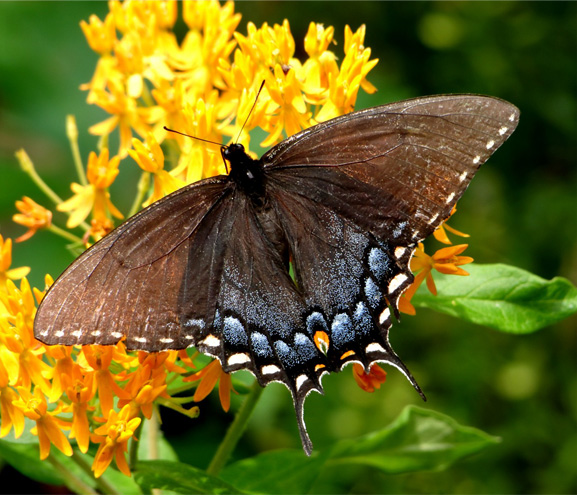 Butterflies are particularly active in the end of south west and north east monsoon. They are also active after summer shower (Mid April) and pre monsoon month (May). Apt time for butterfly watching in Kerala is during the period of December to May. Butterfly migration occurs in February-March. Large congregation of butterflies is seen flying over the forest streams and valleys during this period.

Malabar tree nymph locally known as vanadevatha (forest nymph) is endemic to Western Ghats and is endangered. The satin like partially transparent back veins and black spots are very attractive. Its slow and sluggish fight- somewhat a slow motion movement- in the evergreen patches is worth watching. It gives the feeling of a slow moving kite that has lost its direction. This species is the largest among the milkweed butterflies and also the slowest flier among Indian butterflies.

Malabar banded peacock is one of the beautiful butterflies seen in Kerala. They are jet black and tailed, heavily dusted on the wings and body with a dazzling greenish blue band and glistening blue colour on their wings. This beautiful butterfly is endemic and endangered species to Western Ghats seen in wet evergreen forests and moist deciduous forests and are commonly seen in Thattekkad and Idamalayar forest regions. 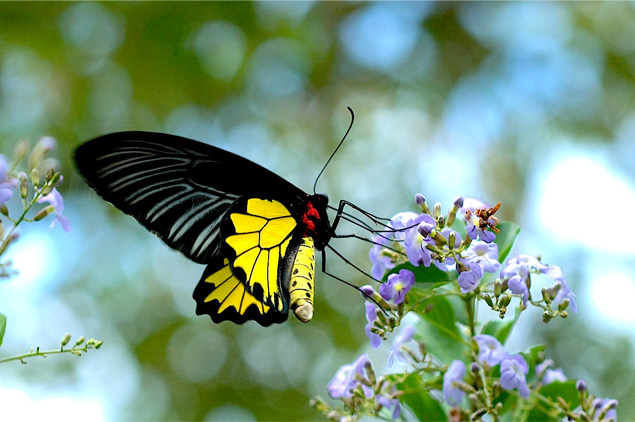 Endemic and endangered butterfly to Western Ghats, Southern birdwing is the largest of Indian butterflies. The upper side of its forewings is deep black and the colour of hind wings is golden yellow with black borders. The females are less shiney compared to males. They also have triangular black spots on the yellow coloured part of the hind wings. This golden yellow colour on its hind wing glitters in the sunlight. They slowly and sluggishly hover over the flowers for nectar. Southern birdwing is more commonly seen during the monsoon and post-monsoon months. The best time to see this butterfly is in the early morning, near Lantana bushes. The food plant of this largest butterfly is Aristolochia Indica, a medicinal plant. The Malayalam name of Southern Birdwing relates with its food plant “Garudakodi”.

The smallest of Indian butterflies, Grass jewel is common throughout the country and may be seen fluttering among low growing plants. The upper side and under side of this tiny butterfly is brown. Underside is spotted with light brown. Grass jewel is tail less with a row of jeweled metallic orange crowned spots bordering the undersides of its hind wings.