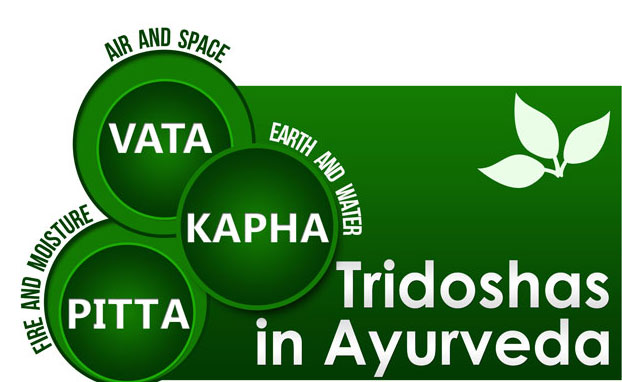 Any matter in this universe is said to be composed of five elements namely Earth, Water, Fire, Wind and Space. They are found in combined form with each element in different composition. As per Ayurveda a human body is composed of the derivatives of all these 5 elements which exist in the form of doshas, dhatus and malas.

The main principle of Ayurveda is called as the tridoshas or the three humours. They are the physiological factors of the body and are classified as vata, pitha and kapha.

Vata is the most important of all the doshas and is meant for regulating the movement and represents the nervous system. It is believed that all the other doshas cannot perform without vata. The lower part of a human body is dominated by the vata and the regions like intestine, ears, bones and skin are dominated by the vata. All activities of the body like elimination of waste from the body, heart beat, respiration, movements of the body etc. are done with the help of vata.

Pitha is responsible for the metabolism of the body. Pitha dosha is combined with the elements fire and water in more quantity. Pitha functions in the activities like converting the food into nutrients. They are also responsible for organ and tissue metabolism and cellular metabolism.

Kapha is combined with the elements water and earth in dominants. Kapha is the principle of all the functions through the fluids inside the body.

It is these three doshas that determines the constitution of a person’s health because it is these three doshas which have to be balanced for a person to be healthy. The main qualities of the three doshas are mentioned here. Vata is dry, cold, light, mobile, clear, rough and subtle. Pitha is slightly oily, hot, intense, light, fluid, free flowing and foul smelling. Kapha is oily, cold, heavy, stable, viscid, smooth and soft.