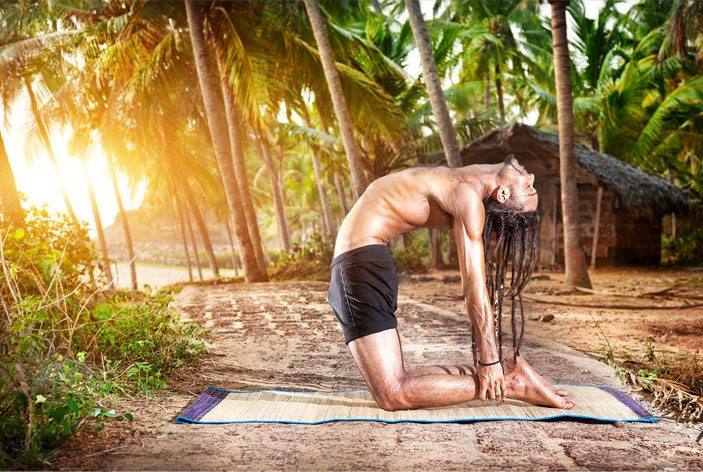 The word meaning of Yoga in Sanskrit is union derived from the word “Yuj”. So yoga can be considered as a union between the mind, body and spirit. Asanas refer to the various postures that are done during practicing yoga. One may often interchange the words yoga and asanas. The importance of yoga has been mentioned in all the Vedas and upanishads. The epics Ramayana and Mahabharata contain stories about yoga practices. Even in the Bhagavad Gita, there is a detailed lecture about yoga by Lord Krishna to Arjuna. It is believed that the origin of yoga dates back to the times of the Rishis who started to investigate about the reality and man’s inner world. According to the legend, Yoga was passed from Lord Siva to Goddess Parvathi and from there to the common people.

People mistake yoga as just some physical postures involving stretching. It is not stretching alone but yoga is about developing a body balance by flexibility and strength. This can be achieved by various yoga postures. These poses are done fast which creates a heat in the body or can be done slowly for increasing the stamina.

An ancient text which includes the philosophy of yoga is the Patanjali. According to the Yoga sutras of Patanjali, there are 8 limbs for yoga each of which are related to various aspects of living a healthy life. The 8 limbs are mentioned here

This includes the 5 guidelines regarding the moral behavior namely Saucha which means cleanliness, Santhosa which means happiness, Tapas which means sustained practice, Svadhyaya which means self study and Isvara pranidhana meaning surrender to God.

It involves the practice of various breathing exercises.

It is the practice of withdrawal of senses which indicates that the outer world is not a distraction from the inner world of a person.

It is the concentration one should attain to focus on anything without any interruption.

It is the meditation that builds upon Dharana.

It is the bliss that builds upon Dhyana. It is the joining of oneself with the world or is also stated as enlightenment.