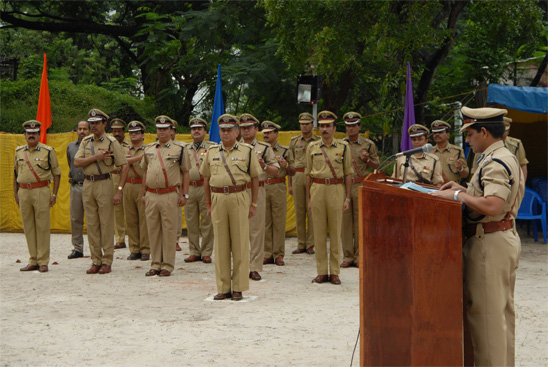 The Kerala Police has various branches. The local police stations are the general executive branch police wing. The crime branch wing deals with the various crimes. It includes sensational crimes as well as those which occur in every districts. The Special Branch wing is the intelligence wing of the state police. It deals with terrorism and anti-national activities. The latter two branches do not have a uniform clothing.

The riot control wing has two units. They are The Armed Police Battalions and the Armed Reserve units. The riot control unit works mainly for dispersing the riots. They do this by using water dispensing unit called Varun. The other techniques used are the usage of grenades like tear gas shell, dyemarker, etc. The police use batons which are made of fibre and cane.

The recruits get trained from the Armed Police Battalions. Here they have to undergo training for nine months. The recruits after servicing for a period, gets transferred to the Armed Reserve Unit. He is then transferred to the local police station. The constable has the option to select whether to stay in the Armed Reserve or Armed Police Battalions. He gets promoted  quickly in such cases but he will not get the opportunity to work in any local police station.

The Sub Inspectors are recruited directly. A small number are also promoted from their ranks. They are the General Executive Branch Officers. The Sub inspectors get their training from the Police Academy and gets appointed in various police stations. They then gets promoted to higher ranks and become Inspector, Deputy Superintendent or a Superintendent depending upon their  performance on the service records.