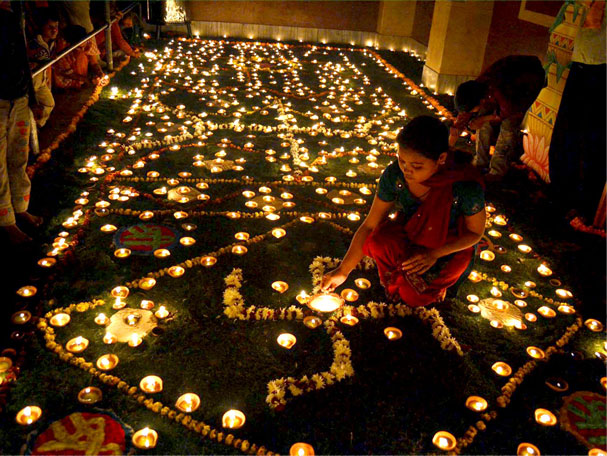 On the day of Deepavali, people wake up early in the morning, take oil bath and wear new clothes. The special item for Deepavali is the sweets and so it is served to all and people fire crackers also. The word meaning of Deepavali is array of lights. This is to commemorate that after the victory of Shree Krishna over Narakasura, the people of Dwaraka welcomed him by illuminating and rejoicing. As it was Chaturdasi it was so dark that the people had to light many lamps on that day. And so this illumination also became a main part of the festival.

In South India, people take a special dish which is made of dry ginger and jaggery after taking oil bath. It is the offering for Dhanwantari who is considered as the father of ayurveda. The eve of Deepavali is the Dhanwantari Jayanthi. Celebrating this separately is no longer in practice and so offering this sweet dish also began to be done on Deepavali.

Deepavali also has some other significance. The darkness is used to denote ignorance and the light is used to denote knowledge. So the lighting of lamps to replace darkness is used to symbolize the replacement of ignorance by knowledge. In the Upanishads we find a saying “’Thamaso ma Jyothirgamaya” which means “Take us from darkness towards light”. Some believes that Deepavali represents this prayer. Light is the symbol of greatest ideals of humans. The festival of lights is celebrated all over the world in various ways. Example, In Japan people celebrates the feast of lanterns which is similar to Deepavali.