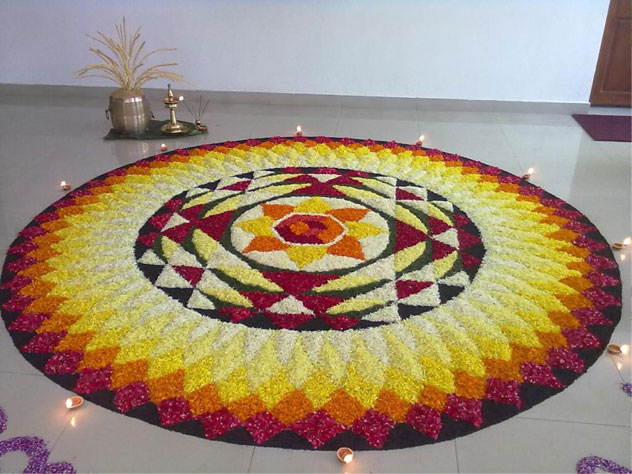 The biggest and the main festival of Kerala is Onam. The legend has it that once Kerala was ruled by a king named Mahabali who was an emperor of the demons. The rule of his time was considered as the golden age and glory. During his rule all people were considered as equal and the people at that time lead a peaceful life without any calamities. Nobody was engaged in any sort of malpractices and unfair kinds. It was what the legend says. Unfortunately king Mahabali was put out from his kingdom by Vamanan who was the incarnation of Lord Vishnu. But his subjects were not happy with it and requested the Lord to permit the king to visit their land at least once in a year. This requested was approved and it was believed that the king visits his subjects during the month Chingam. His arrival was celebrated by the people and this was the reason for celebrating Onam.

For many centuries Onam is a harvest festival and all people irrespective of caste and religion participate in this festival with great enjoyment. Chingam is the Malayalam month corresponding to the English months August and September. Onam festival lasts for 10 days and it starts on the lunar star Atham. The tenth day is Thiruvonam which is celebrated with great harmony and is the most important day. All these 10 days the people decorate their courtyard with flowers and various patterns of floral designs are created by them.

On the day of Thiruvonam, people take bath early in the morning, wear new dresses and visit the temple to pray. The elders of the family present gifts to the younger members. The lunch is a delicious feast consisting of many vegetarian dishes and is served on plantain leaves. Those people who stay far from their native make it a point to visit their home during Onam to celebrate it with their dear ones. Several cultural programmes are also organized as part of Onam celebrations. Sports and games are held at various places where all people irrespective of age and caste participate with great joy. Some of the favorite games conducted are tug of war, chess, ball games etc. Women usually participate in Kaikottikali, thiruvathirakali etc. Another major attraction of Onam is the boat race and thousands flock to have a look at this competition. Our government has also taken initiative to celebrate Onam in order to attract the tourists from all over. Many cultural programmes and also conducted as a part of it at various places.