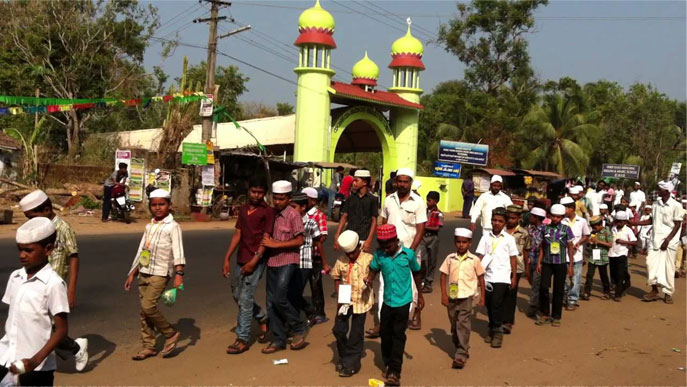 A mosque known as Beemapalli is located around 5 kms from Trivandrum Railway Station. It is the holy shrine of Beema Bheevi and it was dedicated to commemorate Beema Bheevi who was a Muslim lady with some divine powers. She came all the way from Mecca and settled in Kerala along with her son. Thousands of pilgrims irrespective of caste and religion from different parts visit this shrine. The most important festival celebrated in this mosque is the Chandanakudam festival which begins on the first of Jama dul Akbar and continues for the next 10 days. The purpose of celebrating this festival is to mark the death anniversary of Beema Bheevi.

The celebration starts with hoisting the traditional flag of the mosque in front of the elders and other devotees. This denotes the beginning of the festival. On this occasion the devotees offer earthen pots or the kudams which are filled with gold coins. They decorate these pots with sandalwood; hence it is called as Chandanakudam. The opening of the pots is covered with white cloth and a garland is tied around the neck of the pot.

Cheraman Juma Masjid is located at Kodungallur in Thrissur district. This is the first mosque in India and it faces toward the east direction rather than all the other mosques of Kerala that faces westwards. This mosque has the appearance of a Hindu temple and its architecture has the combination of both Arab and Kerala art. The legend is that King Cheraman Perumal went to Mecca and embraced Islam and changed his name to Thajuddin. Before his death he asked his companions to spread Islam in his kingdom in India. It was his Arab companions who had constructed this mosque. People from any religion are allowed to enter this mosque. They have also conducted the Vidyarambham which is a Hindu ritual that marks the beginning of a child’s learning. The Muslim festivals like Ramadan and Bakrid are celebrated here with great glory.

In Veliancode lies a tomb or Jeram in which the body of the Thangal was buried. He was believed to have some special divine qualities. In order to commemorate his death, the nercha festival is conducted. A feast is also provided to all the poor free of cost from near this tomb.

Malappuram Nercha is held at Malappuram mosque in memory of the martyrs who fought bravely against the British. Long ago a female dependant of the chieftain of Malappuram named Para Nambisan was taken by the local Muslims. On hearing this Para Nambisan could not tolerate it and decided to wreak vengeance upon the culprits. He then sent for  Marakkar who was a Muslim leader and the battle that took place resulted in the loss of lives of many from both sides. The bodies of the dead martyrs were kept for resting near the mosque. To commemorate the Muslim fighters who lost their lives in the fight, the Nercha is conducted yearly. This is held at a mosque in Malappuram during the months February and March.

A festival conducted at Pattambi mosque in Palakkad district is the Pattambi Nercha. It is celebrated to commemorate Aloor Valiya Pookunjikoya Thangal who was a Muslim saint from the Malabar area. It is conducted every year on February 5th. In connection with this festival a procession is held which consists of numerous elephants, attractive floats, playing Panchavadyam, Thayambakam etc. The main highlight of the festival is the folk arts. The processions last till late night and ends from the Bharatapuzha river banks.

An annual festival conducted at Kanjiramattom mosque in Kochi is the Kanjiramattom Kodikuthu. The mosque was constructed in memory of the Muslim saint Sheikh Faridudddin. The festival is conducted in the second week of January. One of the main ceremonies is the Chandanakkudam where the devotees participate in a procession carrying pots decorated with sandalwood. There are 6 elephants which forms a main attraction of the procession. Muslim art forms like Daffmuttu, Kolkali, Oppana and Mappilapaattu are performed during this festival. This festival attracts a large number of tourists.