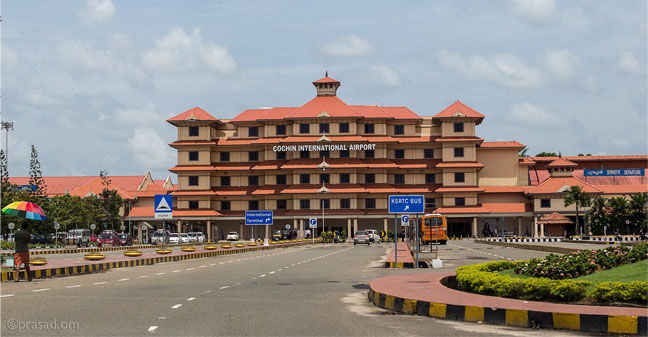 It is the first airport in our country which is not controlled by the Indian government. This airport was sponsored by the state government with the help of non resident Indians. This airport is owned by the Cochin International Airport Limited (CIAL) which is a public limited company. The board of directors includes NRI’s, political leaders, industrialists, share holders etc. The share holders of CIAL include Federal Bank, Bharat Petroleum, Air India, numerous NRI’s etc.

Nedumbassery Airport has the second longest runway in India with a length of around 3400 m. It has separate terminals for domestic and International journeys. The total area of Domestic Terminal is 1,00,00 square feet and that of International Airport is 1,40,000 square feet. This airport can also handle the huge Airbus A380 which is possible in only a few airports in India.

The domestic terminal has two blocks, one for the arrival and the other for the departure. The people who had come to receive or see off the passengers can purchase a guest ticket in order to enter the terminal. There are about 20 Common User Terminal Equipment check-in counters available. The International terminal also has the arrival and departure blocks. Here there are 37 Common User Terminal Equipment check-in counters available.

There is also a cargo terminal for this airport which is considered to have all the largest facilities in India. There are 3 separate complexes for the same namely Centre for Dry Cargo, Centre for Perishable goods and Transshipment cargo complex. Cochin airport has also a heli-pad for helicopter use.

The International Airlines include