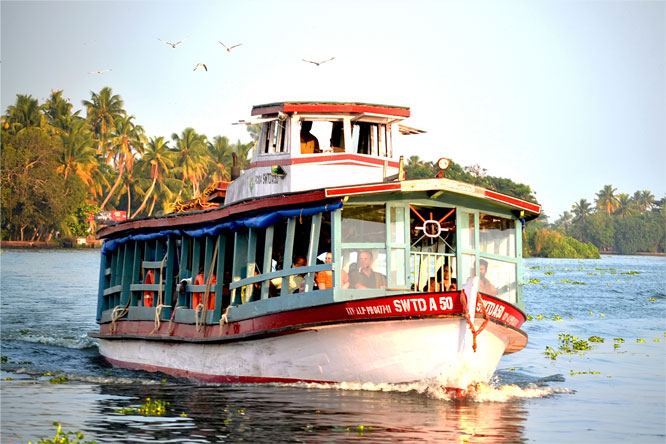 In Kerala there are many water bodies including rivers, lakes, backwaters etc. The backwaters of Kerala such as Ashtamudy and Vembanadu Lake provide a good means of inland navigation. In Kerala, we have the State Water Transport Department which is the agency for providing waterways facilities to the people. This department was established in the year 1968 with the aim of providing transport facilities for those people who reside in water logged areas. These water logged areas include Alappuzha, Kollam, Kottayam, Ernakulam, Kannur and Kasaragod districts. They aimed to provide cheap means of transportation to them. This type of inland water transport has advantages such as pollution free and cheap means of transportation. But at the same time it has drawback of less speed.

There are 41 rivers in Kerala that flows towards west and numerous backwaters. All these are part of the inland transport system. This inland transport system is of length 1895 kms. It is the water bodies that connect the islands and remote villages with the main land. Kerala is very famous for its backwaters and so a journey through these backwaters is also an interesting one. It provides a beautiful view of the paddy fields, coconut trees etc.

It is the inland canals that connect the rivers from one to another. Important places which are commercially needed are situated on these river banks. Here we have the west coast canal system which has a length of about 560 kms. It starts from Kovalam and extends up to Hosdurg. The Cochin and Kollam parts are the most important in this canal system. The Vembanadu Lake which has a length of about 83 kms has Cochin in this north and Alappuzha in the southern end. This river is navigable to a length of 30 kms.

Our country is the largest peninsula in the world and it has a very long navigable inland waterways. In India there are about 10 waterways identified out of which 3 have been considered as National Waterways.

The current National Waterways are

The West Coast canal is situated in our state. It runs from Kollam to Kottapuram which is of length 168 kms. It also comprises of the Champakara canal of length 14 km and the Udyogamandal canal of length 23 kms. It was declared as national Waterway in the year 1993. It is considered to be one of the most navigable and tourism potential area.

The west coast waterway has three stretches namely Kovalam-Kollam sector, Kollam-Kottappuram area and Kottappuram – Kasargod segment. Only the development work in Kollam – Kottappuram sector has been completed so far.